Here's what "Qi Ultra Lounge" looked like, and here's what it looks like now! Don't you love what we've done to the place? 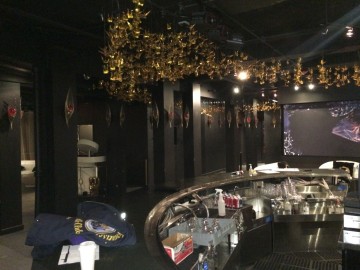 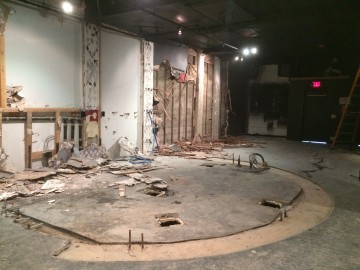 The building is kind-of H-shaped, due to the light wells for the hotel upstairs. It turns out that the light wells have covered-up windows in them. We're looking into the possibility of putting a ceiling on top of one of the light wells, turning one of those windows into a door, and using that as our walk-in fridge. It would be right behind the bar, which is convenient. I'd like to just remove the light well entirely, and reclaim that spot as interior floor space, but that would require much more expensive structural engineering.

There are so many layers on these walls! Concrete; then lath-and-plaster; then another wood frame; then drywall on top of that. We tore it all away because reclaiming even 4 to 6 inches of space behind the bar matters. 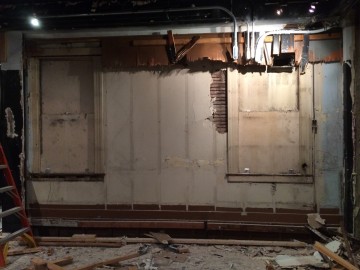 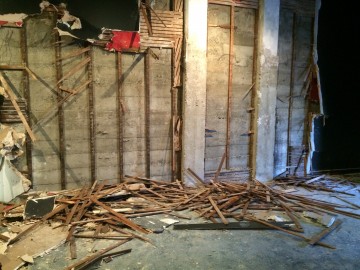 Check it out, we have a basement! Well, a crawlspace. The floor is on a wood frame that is 2 or 3 feet above the sand dunes, with an inch of concrete poured on top of that. This is great news, because it means our plumbing work just got a lot cheaper, since now we don't have to jackhammer up a slab to move drains around.

Also, the apartment building directly to the South of us vanished overnight! We temporarily have a back porch, until they start in on the new building. 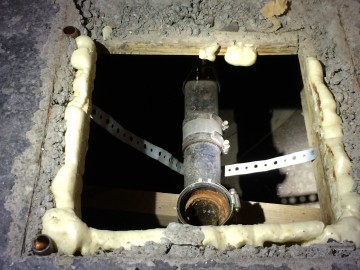 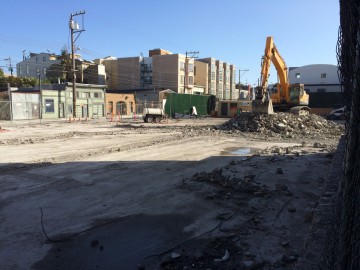 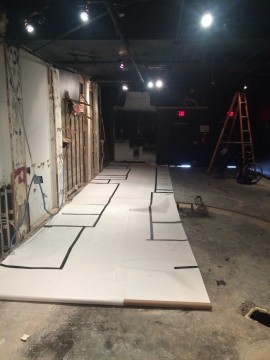 This last photo is where the restaurant kitchen is going to go. We plotted out all of the equipment we're planning on putting back there onto a long sheet of paper so that we could roll it out on the floor of the new space and actually stand in it to see if it all makes sense.

We're still probably a month out from being able to start building the kitchen, due to open questions about the walk-in, plus the vagaries of getting the various city departments to affix their stamps to our piles of paper. This is a frustratingly long time when you're paying rent on an empty building, but not terribly surprising.

There may be some other work we can get started on before that, but not much. Probably we can do the front windows, since technically we're just repairing glass in existing, covered-up windows, which doesn't require a permit. Also we're going to buy a new pizza oven, install the new one on 11th Street, and move the old one over to CW. That'll be an adventure.

We should have gotten our Place of Entertainment permit on Tuesday, but on the day of the hearing we got a panicked call from SFPD saying, "You never informed us of your POE application or hearing! We don't know if we want to object!" When we said, "What about this email from the Entertainment Commission to you, CC'ing everyone in your department, on May 1?" They replied, "Oh..." and asked for a two week delay anyway. We could have pushed it, but gave them the delay anyway to avoid antagonizing them, and because other paperwork is going to take longer anyway. That was annoying, though.

In DNA Lounge news, we have new cameras in Above DNA now, instead of just the one. You can see them in action on Saturday and Monday nights, or on any night when there's a show in Above DNA but not in the main room.