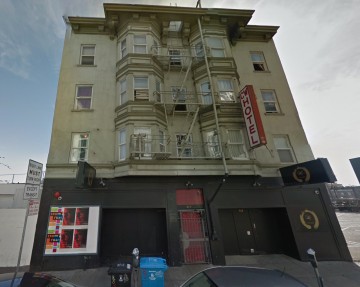 Oops, I accidentally bought another nightclub.

We're going to sort-of divide the space into two businesses: one of them will be a second location for DNA Pizza, and the the other will be a new nightclub that we're calling Codeword. (It's initials are CW, see what I did there?)

I say we're "sort of" dividing them because they will have separate storefronts but still be connected internally, just like we do at DNA Lounge and DNA Pizza on 11th Street.

That means we're converting it from a 21+ bar to an all-ages restaurant! This is getting to be a habit.

So, step one, build a kitchen. There's not one in there right now. We get the keys on June 1. I would not be so foolish as to predict an opening date, because there is just so much bureaucracy between now and then. It depends on how many people write nasty letters and how many times we hear sentences like, "Well, why don't we just push this back to next month's hearing".

Anyway, a second location for DNA Pizza means that when one location is busy, we can stage deliveries out of the other. Right now on busy nights we have to choose between serving slices in-house and making pies for delivery, and it slows down both. Also, the new location is a much better spot for lunch business than 11th Street is, and it's two blocks from Moscone Center.

The tentative plan is for the nightclub side of the business to be primarily a dance club, somewhere around 200 capacity. We may end up doing live music there too, but it's roughly the same size as Above DNA, so at least initially, we're going to focus on live music here, and dance parties over there. It'll act as an incubator for smaller dance parties that can eventually graduate to the big room at DNA.

We need someone to design us a logo for for Codeword. Is that you?