I'm trying something new and stupid with our long-suffering video webcast.

As you may recall, the video webcast has been largely down since Justin.tv shut down. I don't have any good replacement options. I looked at dozens of streaming providers, and except for two, they are all either really expensive, or spam the viewers with commercials all the time. The two services that don't are Streamup and Youtube.

So I was using Streamup, and it sucked, because they're just really, really bad at running their service. Literally weeks of unexplained downtime. Even after I tracked down the actual engineers to talk to and gave them easily reproducible test cases, all I got was, "Huh, that's funny."

Then I tried Youtube, and that's a non-starter because as soon as music starts playing, they Content-ID us, shut down the stream, and threaten hellfire damnation and an airstrike if those DJs don't stop playing other peoples' music right now. 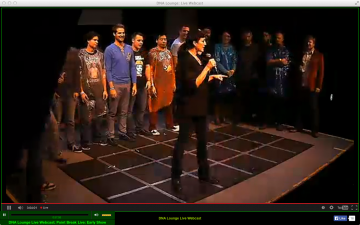 The video webcast is now streaming via Youtube, but it's streaming there silently -- video only -- so that their robots have nothing to complain about. Also, the page with the video embed on it has a second embed of our audio player, streaming the audio webcast from the DNA site.

Downside: There's no chance that audio and video will ever be in sync.

It looks like the audio is between 15 and 25 seconds ahead of the video, but your mileage will surely vary.