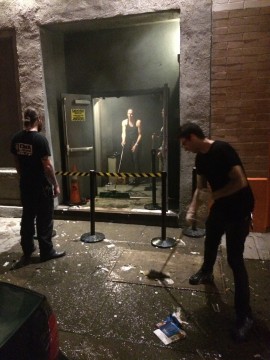 Yesterday at the AIDS Emergency Fund Benefit I learned about a fetish with which I was previously unfamiliar: "piss puppy". This is where a guy in a piss-stained jock strap pretends to be a non-housebroken puppy and pees everywhere, and his partner hits him with a rolled up newspaper and yells "No!"

I learned about this because the guy tried to pee off the balcony and onto the people below.

Later that night, at Bootie, Arlo told me: "Someone re-inflated the pirate. They picked up a flat pirate off of a nightclub floor and put their mouth on it." I said, "Well it is Folsom Street Fair. It might not be the dirtiest thing they've blown this weekend." *

(Those pirates never last the night, by the way. They buy them from China in lots of a thousand.)

And shortly thereafter, as pictured, all of our toilets exploded. It was backing up everywhere, the floor was a lake, oh the humanity. I was having PTSD flashbacks to Chocolate Syrup Wrestling.

And that was only yesterday. Once more unto the breach...