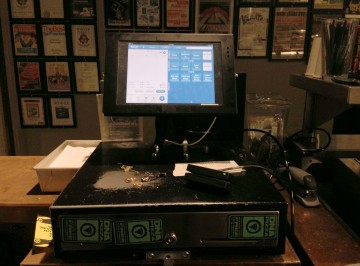 We just de-commissioned the old POS today, and are now running off the new one in the restaurant. It took a long-assed time to get this far. I'm going to jinx it now by posting about it publicly, ensuring that something will break in a spectacular way very soon. But hopefully before the weekend.

The old one was by Ordyx and was MacOS software that ran its front-end on Mac Minis. The new one is by Revel and runs on iPads instead.

We switched because Ordyx was a pain in the ass in a few ways, the most critical of which was their tech support sucked. It was always a 3+ day turnaround before you could get an answer from someone who knew what they were talking about, and the answer was often... not good. Revel seems better so far. Fingers crossed.

Both of them are just front-ends for software running on their vendors' web sites, because that's how it always is now. Everyone does it this way. "Oooh, cloud, cloooouuuud," it's the new hotness. (You know what we used to call "the cloud"? The INTERNET.) Now, I'm just an unfrozen caveman: your modern ways are strange and frightening to me. But I think it's goofy to leave all your financials on media that not only isn't in your possession, but isn't even your property.

"How does an iPad pop open a cash drawer", you may be asking. The receipt printer has a static IP address that the iPad knows, and the drawer is attached to that. The card reader is similarly a network device.

One downside of using iPads instead of real computers with touchscreens is: no ethernet port. You have to use wifi, so you can't rely on physical network security. So a big part of the hassle of setting the new system up was reconfiguring our wireless APs to have a second, private network. iPads also walk off easier, so they're bolted into big metal picture frames.

Neither POS system can talk to a caller-ID box, though both vendors have been saying "coming soon, maybe" for a while. I'm not holding my breath, but I don't get why everyone seems to slack on this: isn't it convenient when you call to place a delivery order and they already know where you live and what you ordered last time? But, about 2/3rds of our delivery orders come through Eat24 instead of direct phone calls, so I guess that's a problem that will eventually correct itself by just going away, like fax machines.

Remember how construction of the parklet was going to happen this week? And then a bureaucrat wanted to have "just one more meeting"? Well she no-showed for that meeting, and when she finally did show up the next week, she gave us the OK again, but said we can't start until next week because... Bay Bridge.

No, I don't know what that has to do with anything, either.