Check it out, we now have a sign for the Above DNA door. Jeremy put this together out of left-over parts from the DNA Pizza sign (the cut-out bits that became negative space on that sign). 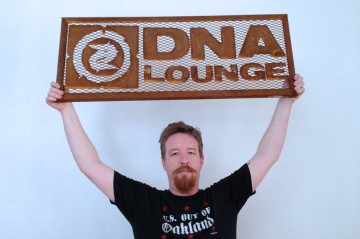 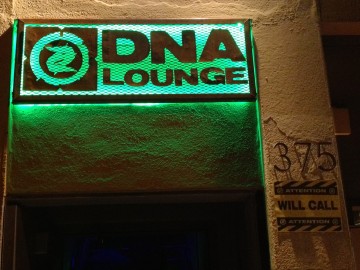 If you can see the error in the sign... you're probably me. Because nobody else will ever see it.

We also replaced the "371" number on the building with "375". I think that since our lot merger, there's not actually a "371" any more, but it might be that the official designation of these two buildings is "371-375" or something silly like that. (Where's 373? I think that was probably the back building, before the two buildings on the DNA Pizza lot were merged into one by dropping a small shanty-town on top of them to serve as the second floor.)

New Years Eve went great! We did a huge number of presales, and still managed to get all those people in the building before midnight, even though they all decided to show up late. That was actually how we decided how many tickets to sell: "How quickly do we think we can get those bodies inside, so that nobody ends up hearing the midnight countdown on the sidewalk and whining at us for a refund because they showed up at 11:45 like a crazy person."

We had more people than at DNA Halloween, but not as many as at Bootie Halloween. Still, a pretty respectable turnout, by which I mean, ka-ching!

Now we only need to do like 20 more events as profitable as that one and we'll have mostly dug out way out of the nigh-bottomless financial hole created by opening DNA Pizza and Above DNA...

This won't be happening in January and February, which are looking very thin compared to our surprisingly-busy December.

The Emperor would like you to know that he's not dead yet:

@NortonI: Someone should inform the management at the DNA Lounge that We are not exactly deceased, but feel free to attend this: http://www.dnalounge.com/calendar/2013/01-08d.html

(Yes, you should come to that, it will be awesome.)

Also I posted my mixtape 124: thirty-one music videos corresponding to my favorite albums of the year. I don't usually announce those here, but maybe I should.