An excerpt from one of our recent Yelp reviews:

Left the club for a second and the security guard told me I was too drunk to come in? Bitch, you don't know me.

We got some nice press on a couple of recent shows: Kim Boekbinder and Trash Talk. And they come with photos... well, such as they are. 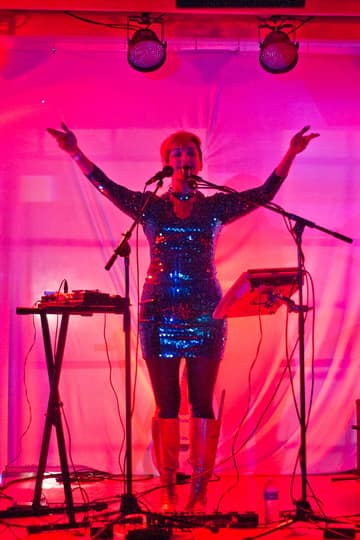 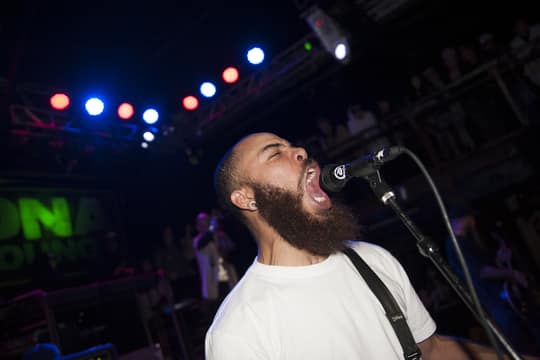 I brought my camera to the Kim Boekbinder show, and I looked around and saw no less than four people with SLRs frantically shooting every second of the show, so I thought to myself, "Oh good, I can watch the show instead of shooting it!"

Yeah. So these are the only photos I got. And they're tiny.

Then there's the Trash Talk ones: there were four acts and we get ten photos, and they're 450×300 pixels. I don't know about you, but my four-year-old computer has a 2650×1440 screen. Who thinks it's ok to publish a 450px-wide photo these days? (The photos in the other set aren't much bigger, either.) Here, lemme give you a little schematic of what that looks like on my screen:

Seriously, what year is this?

I guess my recent enthusiasm for our new photo pass regime was premature.

Also I love that the SFBG site goes out of its way to make it hard to copy the photos, because heaven forfend someone might "steal" that postage stamp from them. I had to do "Inspect Element" to get the URLs, oh the indignity.

(Update: The first photographer from the Trash Talk show sent me more and larger images, yay! And I just got some from a second photographer, too. So that's great. My criticism of SFBG's postage-stamp site stands, though.)

Fun fact about the Trash Talk folks: any room they are in smells strongly of weed even when nobody is smoking weed. I assume that every piece of gear they own is imbued with it. Seriously there was nothing in the room but road cases and it already reeked up the place.

In other fun news, you may recall our policy of arresting and prosecuting any taggers we catch destroying our property. We've got two cases outstanding currently, and you would simply not believe how slowly the wheels of so-called "justice" turn on this shit. No wonder nobody ever prosecutes these shitbags: nobody is as stubborn as I am!

So this isn't about noted shitbag Kyle Neesan -- we still have no recent updates on his case -- but is about a tagger that we arrested in 2011 by the name of Frank Diamos, age 23. After more than a year, Barry's ritual of weekly calls to the DA's office asking for a status update resulted in this reply:

I'm sorry for the delay in responding. I was attempting to track down the officer that deals with graffiti warrants. I do now have more information for you though. It looks like the case was cited as a Misdemeanor, came to our office and was sent to Neighborhood Court. Apparently, as you know, the subject did not appear at his Neighborhood Court. Usually when that happens the case gets forwarded back to the Misdemeanor Charging attorney or down to the head of Misdemeanors to be charged if we are still within the charging timeline. If we are not, the case is forwarded back to the police station from where it originated to have the officers there prepare a warrant to go out and re-cite or arrest the suspect. We have one year from the date of the crime to charge a Misdemeanor case.

Here, I'm not sure where the disconnect occurred, but it appears none of those steps took place in a timely fashion. Whether the case never went back to the Charging Deputy to be charged, or the case never went back to SFPD or SFPD never drew up a warrant, I do not know. It does appear, however, that the case slipped through the cracks, and since the one year timeline has lapsed, our hands are unfortunately tied in regards to this case.

I am very sorry for that piece of news and will discuss the issue with my supervisor to make sure we can prevent this in the future. I know that does not help you in your particular case, however, I offer my apologies and hope that if I can do anything else you will not hesitate to call or email.

Please let me know if you would like to be put in touch with the supervisor of the Neighborhood Court division and I can do so.

Again, I am sorry.

As long as he's sorry, I guess justice has been done, huh?

Let that be a lesson to you, local business owners: the next time you catch someone vandalizing your property, just go Batman on their ass, take them around the corner and beat the living shit out of them. Even if you get arrested, apparently if you choose to just not show up for your court date, the DA won't even notice.