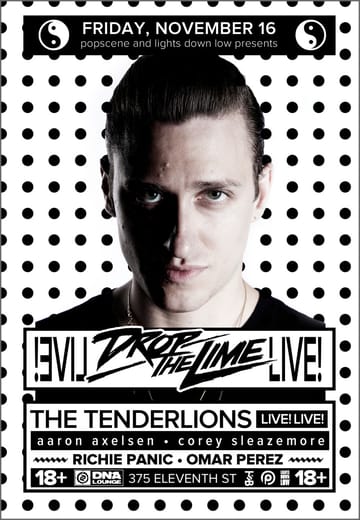 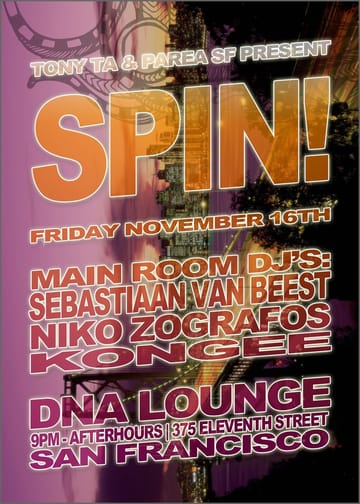 Here's something we haven't had the ability to do before: it turns out that ticket sales for tonight's Drop the Lime + Tenderlions show were kind of light, so we moved that show to Above DNA, and were able to book a different DJ event in the main room on the same night, at the last minute: Sebastiaan Van Beest. So that's handy!

It's a little weird in that this required the event's URL to change, since those are tied to the room, so if someone clicks on an old link to Drop the Lime, they'll get the other event instead, but, oh well. It probably won't happen often.

(I don't know Sebastiaan, but both Drop the Lime and Tenderlions put on a fun show, so you should come!)

I have already received my first email saying, "Hey, where's the webcast??" about an Above DNA event, since currently the webcast is only set up for the main room. The reason for that is: it's a hugely complicated pain in the ass, and we haven't gotten around to doing anything about it yet. And we may never; I haven't decided yet.

If you took a break from the Internet last week/summer, you may have missed that she's a Daytona Beach teenager currently assuming the "ruining hip-hop" mantle with her geekiness, doodles, weird voices. But unlike say, Ke$ha, Kitty Pryde can rap and like a rapper, she combats haters with considerable grace and counter-aggresiveness.

She spent the first handful of songs breathily self-deprecating, comparing herself unfavorably with the opening acts and squeaking. Her EP is called haha i'm sorry, as befitting a rap parody of a teenage white girl.

There are, as usual, no photos of this landmark event.

It was... something. Kitty Pryde mostly sat down on the stage and giggled through her songs, sometimes letting the A.D.D. get the best of her and getting bored halfway through and telling her DJ "OK, let's do the next one now". Her show was certainly not something I had seen before... but I don't go to a lot of junior-high talent shows. Not since we hosted BrokeNCYDE has a show "touched" me in this way. I feel like I've been given a "Rusty Tumblr", if you know what I mean and I think you do.

Also they were repeatedly guilty of "Frisco" Violations. Inexcusable.

Hottub were fun, though.

I probably shouldn't be allowed to write reviews.