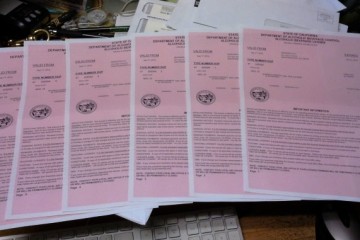 At last it can be told: now that we actually have our liquor license, let me tell you about some of the conditions that we dodged.

These conditions were putatively written by SFPD, but the line between "SFPD" and "ABC" is very fuzzy in this situation, since they collude and engage in finger-pointing whenever it's convenient to pass the blame on to the other side, even when they're really the same side. SFPD says, "Hey, don't blame us, it's ABC's license", and ABC says, "Hey, we're just following the recommendations of SFPD." Then they presumably cackle madly once you leave the room.

We spent months fighting these. Since, at the time, we were also in the middle of the lengthy process of getting our construction permits, we had time to have this lengthy argument with SFPD/ABC over the permits, so it didn't actually cause us a delay in opening, but it was still a pain in the ass and a huge waste of time.

There were some weird, stupid ones that they put in there, like:

During normal business hours, the premises shall be designated and used for and possess the necessary utensils, table service, and condiment dispensers with which to serve meals to the public.

We don't have waiters at the pizza restaurant; you order at the counter. They wanted to make this a violation of our liquor license, that is, if there was ever a time when someone didn't come to your table to take your order, they'd be allowed to revoke our ability to sell alcohol. This is the kind of stupid micro-management they always pull, because after all, a cop is an expert in how to serve food, right?

This one was a real hassle:

No noise shall be audible beyond the area under the control of the licensee.

And then after we objected, they tried to rephrase it as

Entertainment provided shall not be audible beyond the area under the control of the licensee.

San Francisco already has noise ordinances. There are specific rules about how loud is too loud. These rules include specific decibel measurements as compared to the ambient noise level on the street (e.g., car, bus and pedestrian traffic). But this condition, had we accepted it, would have made it a violation of our liquor license if any sound was audible -- which is to say, if you could press your ear against our front door and be able to tell there was music inside, that would be a violation.

And it would not simply be, "you get a ticket". It would be, "you lose your liquor license and are put out of business". That's one of the games ABC always plays: they try to take something that's already illegal under the civil code, and make it a condition of the liquor license so that the punishment for a violation is escalated from that which is dictated by the actual law, to "now we get to take your whole business away".

Then there was this gem:

The petitioner shall utilize electronic surveillance and recording equipment that is able to view all exit and entrance points of the exterior of the premises. This electronic surveillance/recording equipment shall be operational at all times that the premises is open to the public. Said electronic recording(s) shall be maintained for no less than 72 hours and shall be made available to the Department or Police Department upon demand.

They wanted to mandate that I surveil all of my customers, and turn that information over to the Government without a warrant. Hello, Fourth Amendment.

I told them I'd take them to court over this one, so they eventually backed down. However, this is a standard condition that SFPD is putting on all new liquor licenses! This is the underground regulation that is their usual boilerplate that they hand out to everyone now.

They tried to get this written into the law back in 2010 and got shot down, so instead they went in through the back door and are adding it as a liquor license condition for everybody. It's a complete subversion of the democratic process: when the people and their elected lawmakers unambiguously say "no" on a civil liberties issue, the unelected SFPD and ABC career bureaucrats think they can force a "yes" anyway. It's disgusting.

It's really important to realize that most people trying to open a new bar or restaurant do not have the luxury of fighting these default conditions. Fighting them normally means paying rent on an empty building for six months during the appeal process. Most people do not have the ability to do that, so they will just cave and say "yes". As a result, you can expect to be seeing a lot more surveillance cameras around town. It's a good bet that any new liquor license that was issued in the last year or two has this condition on it.

Sadly, most people wouldn't even think to fight it in the first place. Someone who is civil liberties-minded sees this kind of power-grab as the slow march toward totalitarianism, the surveillance state and the Panopticon, and see the fighting of it as their civic goddamned duty; but I suspect that most people would just read it as, "Oh, I have to spend another thousand bucks on a security camera? Bummer. Oh, and if ABC or SFPD ask for the recordings, I have to give them to them? Ok, whatever."

But hey, if you didn't do anything wrong, you don't have anything to worry about, right?