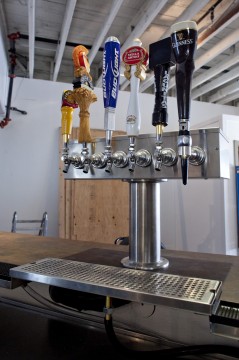 The new beer lines are hooked up!

To recap: the big DNA Lounge walk-in fridge is full of kegs, and there's a mile-long series of tubes running to each bar. There's a huge tank of carbon dioxide that is used to push the beer out of the kegs and into the tubes (and because our tubes are so long, there are pumps as well). The Beer Snake has glycol (antifreeze) circulating alongside the beer lines to keep it cool so that it doesn't foam up. At the bar, each tap is just a valve. CO2 is used to push the beer instead of air because oxygen makes beer go bad. In the case of Guiness, it's nitrogen instead of CO2 or air.

Also in the back is a big rack of bags of syrup for the sodas. There's a different snake for sodas, which are pushed down the tubes warm and in syrup form. One of the tubes is CO2 instead of syrup. At the bar end, the syrup is mixed with water and circulated through another series of tubes inside a metal plate beneath the bartender's ice bin, and then a pump injects the CO2 into it. This reaction requires cold, which is why you get a flat soda if you use the soda gun at a closed bar that doesn't have ice in the bin. And then finally, the soda gun is just a valve.

These two snakes fan out from the DNA Lounge back room to our now seven bars.

And, all of our beers have changed!

The beers on tap on the DNA Pizza side of the world are now: Firestone Pale Ale, Shock Top, Bud Light, Stella Artois, Lagunitas IPA and Guiness. No cider on tap, but we have Ace Apple in bottles. Meanwhile, over on the DNA Lounge side, we've got: Ace Pear Cider, Big Daddy IPA, Widmere Hefeweizen, Stella Artois, Mirror Pond and Guiness.

So, why's that... well, for large bars and clubs, beer and soda distribution systems like the ones we have are almost always installed for free by the distributors. You're buying the product from them, so it's in their best interest for you to be able to move that product efficiently. So we said to our current distributors, "Hey guys, three new bars! Gonna be buying a lot more of your product! Hook us up!" And they said... no.

Both of them said no -- both DBI (our former beer distributor) and 7Up (our former soda distributor) were unwilling to pay for the installation of the respective new systems. (Well, DBI didn't technically say no, but they kept saying "It's all good bro" without ever committing to anything, and we couldn't wait any longer.) As a result, both of them lost all of our business, since we turned right around and switched our distribution to Coke for sodas and Matagrano for beer. Those folks were happy to have our business, and rip out the 7Up/DBI systems and install their own for free.

We are not a small account. I really can't believe the other guys really let it go this far. But, oh well. Not my problem now!

It's fortunate that there are multiple distributors (really, only the two of each) because each one has a total monopoly on the products that they distribute. E.g., you can only buy Miller from DBI, and you can only buy Budweiser from Matagrano. I'm not sure if the beer companies actually own the distributors, but the distinction is academic.

That means that we still have to buy Red Bull cans from Matagrano, because for some goofy accounting/sales-reporting reasons, it's cheaper for us to get it from them than Costco, and they have an exclusive.

And that's today's lesson in both the mechanics, and the goofy economics, of getting people drunk.