The structural steel for framing the new doorways has arrived. Since we took out a bunch of concrete, our structural engineer made us put these big girders in to replace it. Here's the downstairs set:

It's one big girder with a long flange on top that bolts to the wall above the door-hole, and it weighs about 500 pounds. It goes between the upright concrete pillars in the wall, which means it had to penetrate into the bathroom, which made quite a mess of the tile.

Holes are drilled into the concrete and the threaded rods are epoxied in; then after that cures, the bolts can be screwed down, and the wall can be framed in around it.

And here's the upstairs set, which is four girders (two horizontal and two vertical) so that set must weigh almost a ton: 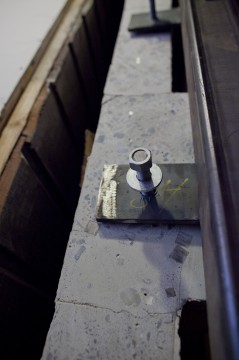 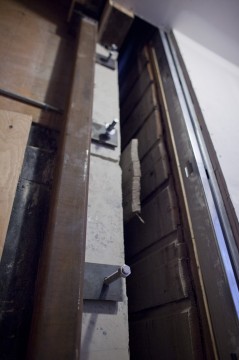 That flat concrete section you see there is where the wall was cut: that's a cross-section of the poured wall, and the darker spots are the rocks, gravel and rebar inside the wall. It's completely smooth to the touch. That saw was a no-joke saw. The gap you see is the space between the two buildings. Those stray pieces of wood sticking out in the first picture are the (former) outside wall of DNA Pizza from before DNA Lounge existed; and the jankier wood you see in the third picture is the remains of the lumber that they used as the mold when pouring DNA Lounge's concrete wall.

Now that the steel is in, the doors can finally be installed downstairs, and the new stairs upstairs can be completed.