Work has begun on the new second floor door. We've cut away the wall on the DNA Pizza side, and the header for the new door frame is installed. We also had to relocate a bunch of cabling on the DNA Lounge side that was running across the wall we're going to cut away. As you can see, the top of the door is higher than DNA's roof, so the next step is to build a dog-house to raise the roof over where the new stairs will be. After that's done, we can actually saw through the concrete of the DNA Lounge wall. That's a few weeks away, though. They've drilled a few exploratory holes so far to make sure that everything's lined up where we think it is. 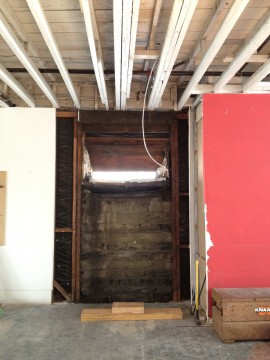 This will soon be a hole. 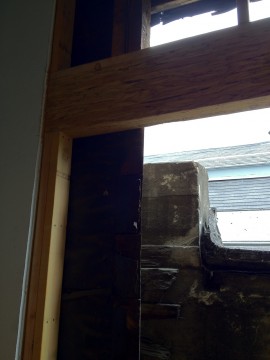 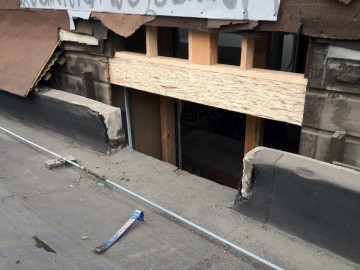 The view from outside.

It looks like there's a bunch of conduit and plumbing and possibly a gas line inside the downstairs wall where that door's going to go, too, so that's going to be a pain in the ass to relocate. 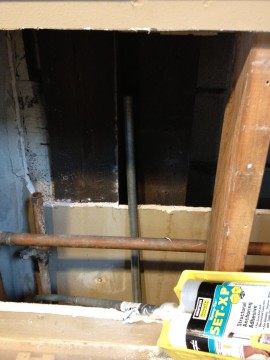 The structural engineer decided that he didn't like the wall that was holding up the floor where the new bar on the second floor is going and wanted us to anchor it to the building's foundation. I swear, every time we let that guy walk into the building, my money just evaporates. This latest notion of his sounded like it was going to be another enormous clusterfuck, but they found a way to do it without it being too much of a nightmare. They took some of the posters off the wall downstairs in the restaurant and opened up that wall; used a five foot long drill bit to drill into the foundation; and epoxied a piece of threaded steel into it. That's going to be screwed in to a twelve foot piece of threaded steel coming down from above, and the whole floor will sit on that.

Tomorrow is the second night of one of our new Friday events, The Launch. The first one was fun. You should come! The crew putting it on put a lot of effort into coordinating their uniforms: I have never seen so many NASA hotpants before. They also have this crazy art-car they park outside that has a space ship on a scissor lift. Here's a video from last month: