"Negotiations are ongoing." Maybe we'll know something real in a week or two.

Meanwhile, work on the upstairs rolls along. All of the electrical has been done (except for the parts that go into objects that haven't been built yet) and the new floor should be done soon. It's a multi-layer sandwich somewhat similar to what we did in the main room. They started with the existing floor, a mess of wooden slats and patched plywood, and filled in all the holes and smoothed it out with bondo. Then they painted on this thick red paint that turns into a flexible waterproof membrane. It feels like latex. On top of that goes a thin layer of tongue-and-groove plywood, glued down to the red stuff; and then glued to that is a hardwood ply. 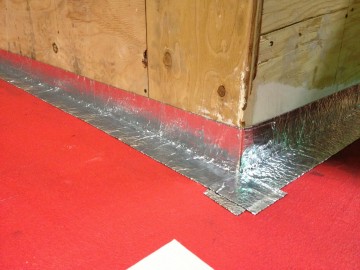 The silver stuff around the edges is a super-sticky waterproof tape. That gets covered with a small baseboard.

Downstairs we used normal plywood for the top surface, and it doesn't hold up very well. We have to patch and paint it way too often. The harder stuff is what we used for the surfaces of our gogo boxes, and those hold up much better, so hopefully we'll have to patch this floor less often. But the real reason for this fuss is to make it as waterproof as possible, since having spilled drinks dribble through to the kitchen would be a real drag.

Once the floor is done, which should be this week, they can start tiling the bathrooms. They have to do it in this order because the codes are picky about not having discontinuities in doorways. Then doors, and then toilets and sinks go in last.

And that will be it for Permit One. It's likely that by the time they run out of stuff to do, we'll either have Permit Two, or we'll have a confirmation of full-on Apocalypse.

Come to Mortified this Friday! It's always great, but ticket sales have been a bit slow this time around. So, it'll probably be easier to get a seat...