You may have noticed that we're closed this Friday. I can't remember the last time that happened. It's been years.

We had an event booked, until extremely recently. About two months ago, these guys Martin and David, who were, like, part of the C-list of Blow Up's promotional helpers, booked the date for a party with Drop the Lime, who played at Blow Up back in February. And then, eight days before the event, Martin calls us and says, "Hey, David is afraid we won't make any money on this show, so he's not going to pay up, so is it cool if we cancel?" In case you were wondering if that's cool, no, that's super-duper not cool. This was after they had already paid us a deposit. Obviously we won't ever trust them to book anything here, but what they may not realize is that by fucking over the artist like this, The Windish Agency also won't be returning their calls. That's a somewhat larger bridge to have burned.

There has been some minor perceptible progress in our permit review. It has made it to eyeballs at both the Building and Fire department, which is... good? But this has resulted in the fun situation of having people from one department interpret the code one way and people from another department interpret the same code in a completely different way. Negotiations are, as they say, ongoing.

In the event that we someday have custom-printed pizza boxes -- and I'm not foolish enough to predict that this will ever actually happen -- they might end up looking something like this prototype: 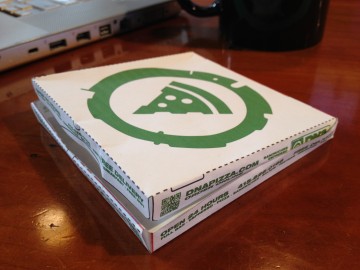