There has been actual construction work on the second floor of the pizza place! Well, "demolition" work, but that's close enough. Hammers were swung. Massive piles of junk were hauled out.

They've removed the interior walls from the back room. It's a really nice-sized space now! Too bad we're about to shrink it again by carving some bathrooms out of it. Photos: 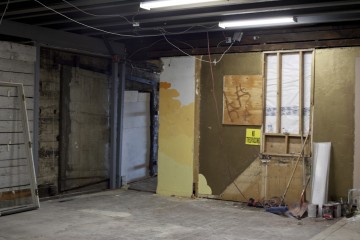 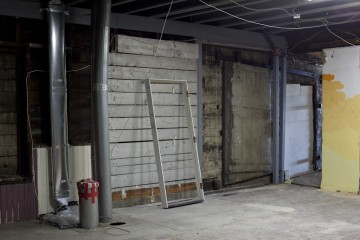 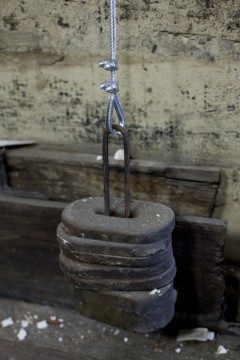 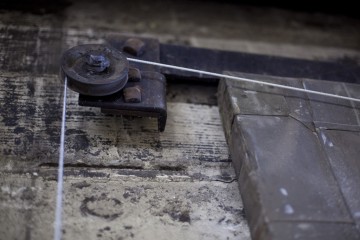 I don't think I've mentioned what used to be up here before... apparently one of the previous tenants had, how shall I put this delicately, a "hydroponic garden" of some kind. There was a pair of rooms that you could only enter by climbing through a window that were covered, floor, walls and ceiling, with slick white plastic. It was creepy as hell, like a Dexter kill-room but less obsessively tidy: 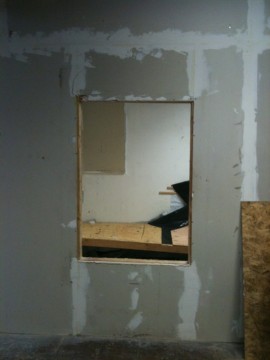 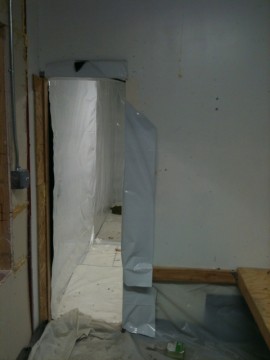 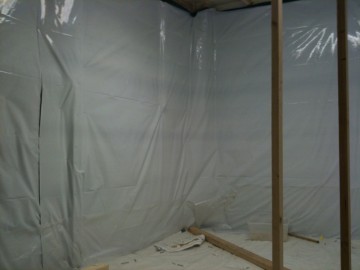 I also don't think I've mentioned that we're getting a parklet! The location has been approved, and the next step is to get the Planning Department to sign off on our architectural drawings of it.

This is what's on the street now, spanning DNA Lounge and DNA Pizza:

And this is what it's going to turn in to:

The parklet will be about 30' wide, and have tables and a standing-height railing. In addition to that, we're getting rid of two car spots and adding a bunch of bicycle parking.

I wouldn't be foolish enough to make a guess as to when this will be finished, but so far the bureaucracy has been relatively minimal.

You know who has a puzzling internet footprint? Metal bands.

As you might expect, I have a bunch of feeds of searches for mentions of DNA Lounge. Normally this turns up the occasional article or mention of us or a band who is playing here. However, when we have an upcoming show by a metal band, the references go CRAZY. Apparently every metal fan in the world has a blog, and every one of them feels the need to post the entire worldwide tour schedule of every metal band that exists. It feels like the kind of copy-and-paste that you see from adword-farming spam-blogs, but I've looked at a few of them, and it seems not. I guess the metal fans are just obsessive enough that they all consider it front page news that a band they like is playing a show in a city that is six thousand miles away. (Some are reposting articles from other blogs, but mostly they appear to be real blogs.)

So I end up getting half a dozen notifications a day that look like this:

Fans of other genres don't do this. It's weird.

The other thing about metal bands: they still use Myspace.

As we get repeat visits from bands, DJs and other performers here, I update their URL links on our calendar, and there has been a steady progression of replacing their old Myspace URLs with new Facebook URLs. I don't think I've added a new Myspace URL to the calendar in five years -- except for metal bands, who are all still using Myspace. It's baffling.

I'm not seeking theories to explain this (I'm sure you have them), it's just a little internet-sociological oddity that I've noticed.

So, Free Coffee February is almost over, and has resulted in what can generously be described as a "smattering" of new customers. Not exactly the hockey-stick graph one dreams of.

I had a frustrating conversation the other day with someone whose company has for several years been in the office building on our block that is just past Slim's. Though he's a regular of DNA Lounge, and enjoys our pizza, he was somehow unaware that we were open in the morning, or that we have espresso. I asked him, "Have you even noticed that we have those A-frame signs on the corners hyping coffee?" He said, "Oh, I walk by that every day. I walk by and think, 'Oh, hey, DNA, I like those guys'. I've never actually read it, I guess!"

It was frustrating because here's a guy who is exactly our target market for the morning/lunchtime crowd, and we were completely failing to reach him with our message of, "Hey, we exist". I don't know why, and neither did he.