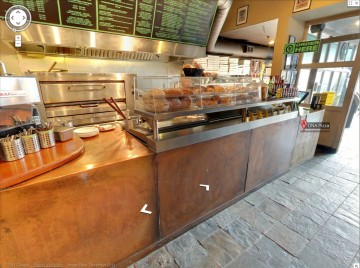 Check it out, Google Maps now has the inside of DNA Pizza on Street View! (You get there by clicking on the image in the sidebar on the left of the maps page.)

You wouldn't think that Street View car could fit through our front door, huh?

We're really having trouble building up our morning business at DNA Pizza. Basically we're losing money every hour we're open between 4am and 11am. Now, 4am-6am I could just write off, but that 6am-11am period is when we should be doing a lot of business selling coffee and pastries to people on their way to work at our neighborhood businesses, and we're not. That's why we bought that damned espresso machine in the first place. There are a bunch of other cafes in the neighborhood who accomplish this, so it's not that the business isn't there. We're just doing something wrong and I don't know what it is.

Maybe we're still just failing to get the word out, but we've been advertising, we've been flyering local businesses, etc.

We thought that it might go better if our coffee was one of the Big Four "Hipster Coffees" (Blue Bottle, Ritual, Four Barrel or Sightglass), since a lot of people have brand loyalty to them, but they've all refused to do business with us. They won't sell us their product, and they won't really tell us why. The answer we get after multiple conversations is, "Oh, we're so busy right now, we couldn't possibly take on a new client". But that's not a real answer. That answer is equivalent to "it's not you, it's me." (Hint: If someone tells you this, it's you.) So I don't know why they won't let us use their beans. I guess we're just not pretty enough to date.

If business doesn't pick up soon, we may have to give up on the whole "24 hours" thing, and only be open between 11am and 3am. This is really sad, because San Francisco doesn't have enough 24 hour restaurants, and I thought I could do something to help with that. I assumed the lack 24 hour places was because the city makes it such a pain in the ass to get the permits, but maybe it's really because the people who live here don't actually want them.