Turns out that our headlining DJ last night, Alan Braxe, has a bladder control problem. That's the generous explanation for why he decided, in the middle of his DJ set, to turn around and piss on our back-wall curtain instead of using the restroom which is twenty feet away. 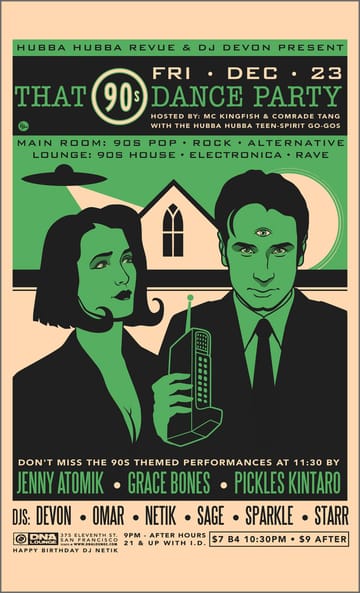 After his set, when we had tossed him out, he was aghast that we chose not to let him back in. We said that we'd be happy to let him in if he paid us what it was going to cost to have the curtain cleaned. He declined. Also he threatened to sue us. "For what?" I inquired. "Because I wouldn't come out and talk to him," Barry tells me.

Well, good luck with that.

Update: If you are tuning in to this story late, you might want to read my followup as well.

We also have a few of the fabulous new R. Black 11"×17" posters for That 90s Dance Party (coming up on the 23rd) for sale in the store. Ten bucks! And there is no urine on them at all.