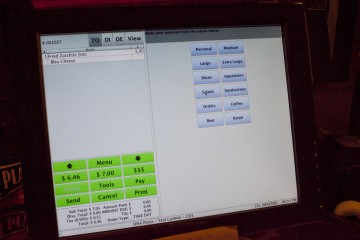 We've finally retired the old AST Linux-based POS ("Piece of Shit" or "Point of Sale", your pick) system that we inherited with DNA Pizza. Now we're using Ordyx. It runs on a Mac Mini with a touchscreen, and apparently half of it runs on their server (oh, the kids call this "in the cloud" these days) meaning, presumably, that various things go wrong if we're ever off the net, and they get to charge us a monthly fee instead of just selling us the software outright. But, it seems pretty good, and it's a million times better than what we had before.

We've also upgraded our network quite a bit in the last few weeks. I've already written about how we recently got a DSL line in addition to our existing T1, and were using the T1 for the webcasts while using DSL for the wifi network. We worked out the kinks on our DSL install and are now getting the advertised 20mbps out of it instead of the 5mbps we were getting before; and we've also upgraded the radios in our nine Aironet wifi hotspots, so they now do both 802.11b and 802.11a, which means that you should be seeing upwards of 17mbps downloads on laptops and iPads. (Bafflingly, iPhones don't do 802.11a, so you'll "only" get 5mbps on those.)

Also we're now experimenting with running the webcast over the DSL instead of the T1. Back in 2001, webcasting 24/7 over DSL just plain didn't work at all, but we'll see whether it does now. I hope so, because we're paying a couple hundred bucks a month for that T1, and I'd really like to be able to cancel it! 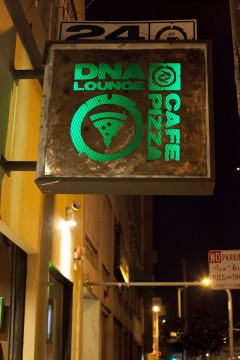 Last week, Jeremy said "Let there be light", and lo, there was light within the pizza sign. It's not quite bright enough yet, but it's a good proof of concept. He found a string of waterproof 12v RGB LEDs. They're small enough that we're able to tuck them away and light the sign from the front instead of from inside. Very futurey! We may end up replacing the fluorescent tubes behind the big sign with these as well, because they last forever.

Once you're done gorging yourself and fighting with your family, come out to Meat: Thanksgiving on Thursday. It's been a bit over a year since we've done Meat. There will be grillin'. Oh yes.

Some videos have emerged of the Obscura show. No photos, though.