Tonight is the big 25th Anniversary Party! We hope to see you here. Come early for the open bar from 8pm to 9pm with special guest bartender, District 6 Supervisor Chris Daly and the musical stylings of DJ Brian Raffi, one of DNA Lounge's original owners! 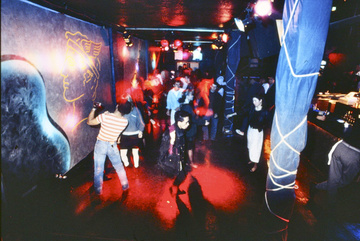 Followed immediately by a 25-year mash-up retrospective from Bootie, and a midnight aerial performance by DNA Lounge's own Your Little Chernobyl.

Jim English, another of the original owners, sent me a bunch of photos taken within the first few weeks of the club's opening in 1985: check these out!

Photos are also up of last week's Watain and Hubba Hubba Revue shows.