<< 22 Oct
30 Oct >>
DNA Sequencing
with your host
Jamie Zawinski
24-Oct-2010 (Sun) Wherein the calendar is noted, with attention to 5 days of Halloween and our 25th Anniversary!

We've got quite a lot of epic epicness coming up in the next couple of months. Allow me to hit the highlights for you, starting with Halloween Weekend:

The weekend gets off to a start with a party thrown by several SFSU student organizations, featuring live bands and a costume contest.

The headliner is Fans of Jimmy Century, who have played here several times before in their previous incarnation of Simon Stinger. I liked them a lot, and they put on a great, theatrical show. 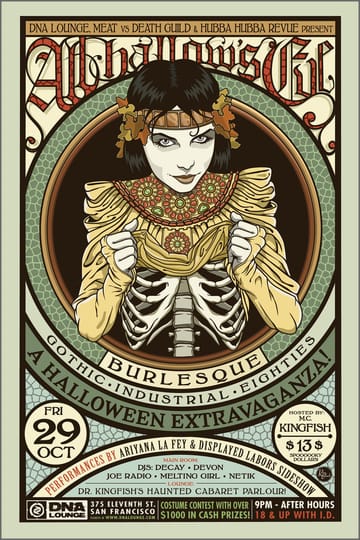 This is actually our twelfth Halloween party, since for a while there we were celebrating Halloween in both October and April. In the main room we have Dr. Kingfish's costume contest, plus the usual Meat and Death Guild suspects. In the lounge we have a a gaggle of burlesque acts in, which should be, let's say, "intimate"! Tassles will likely be all up in your business and invading your personal space.

Look at this fucking poster. How much do you want this badass fucking artwork for your fucking wall? Holy fuck. Look at those ribs. You know you want to buy the living shit out of that. It's only ten fucking dollars. How is that even possible? I don't even know. 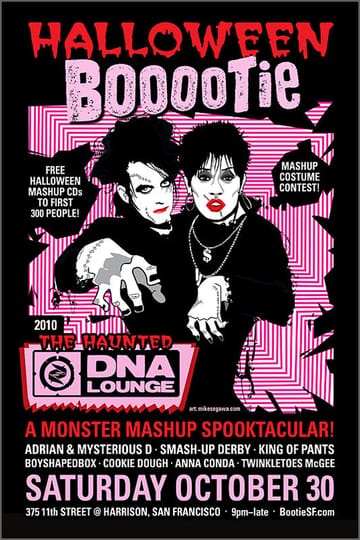 Halloween Booootie! Bootie will also include a costume contest, so you'd better have two ready to go. If you don't, maybe you should head down to Girls's Costume Warehouse right now.

Let it be known that the Booootie Halloween poster is also on sale now! It is likewise a measly ten bucks, and a bargain at any price.

Death Guild: Day of the Dead Guild. It's like the hair of the dog for your favorite weekend of the year.

Ok, moving on to next month:

Mark your calendars, because at November's third Bootie, we will be celebrating DNA Lounge's 25th Anniversary!

That's right, DNA Lounge has now been open for a quarter of a century. Whoa.

We will be starting the festivities an hour early, with an open bar from 8pm to 9pm. Our DJ for this hour will be Brian Raffi, DNA Lounge's original owner! Brian and his partners Jim English and Jeff Mason opened this club in 1985, so there is no more appropriate DJ, right?

We're still working out the rest of the details, but I think it's safe to say that the genre of mash-ups lends itself quite well to a 1985-2010 retrospective...

By the way, if your company is getting a late start on planning your annual holiday party, we do still have some open dates in November and December. Surely you'd rather have it here, than in the cafeteria. We can make this happen.