Booths! We've just had four more six-person booths installed on the balcony next to coat check. They look great. This means we'll be able to sell more table service packages each night; and when you reserve a table, it will always be a booth instead of some being booths and some being tables. Also that space was kind of bare and largely unused before, so the booths are a good use of that area. 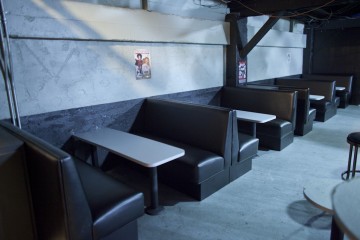 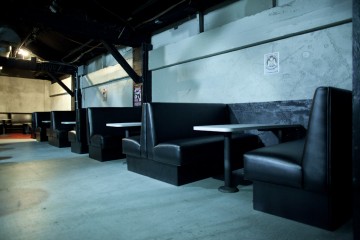 Also, we're beginning to go paperless with our posters. The reason for this is that I think the mess of paper haphazardly taped to the walls looks pretty crappy. Originally I wanted to just get some frames into which the posters would go, but that has a whole bunch of stupid problems, not the least of which is that picture frames are actually kind of expensive. 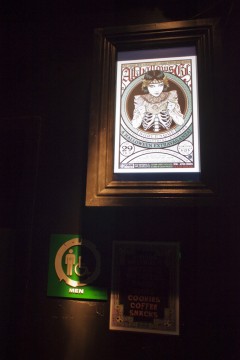 So Devon spend a lot of time trying to figure out the easiest/cheapest way to make some kind of digital picture frame system work, and what we've settled on is a bunch of 20" HDMI monitors driven by a single AppleTV with a DVI-to-Cat6 splitter fanning out to the monitors. So far we only have one monitor installed, next to the men's room, but more will be installed in the coming weeks, and once those are up, we can finally stop taping things to the walls.

We decided to go with monitors instead of "digital picture frames" because pretty much all of the digital picture frames on the market suck in one way or another. Mostly they are tiny -- under 11" -- and if they aren't tiny, they cost as much as "real" monitors do anyway. Most of them aren't networked, or their networking support is highly halfassed, which would mean that to swap in this week's flyers would require having an employee walk around and physically change an SD card in each screen. Ugh.

Unfortunately, AppleTV is almost completely featureless. There doesn't appear to be any way to have it display a slideshow from an RSS feed, for example; it can talk to Flickr, but that's it. I guess I'll either have to upload our current crop of flyers to Flickr and do it that way (which annoys me, because why should I have to depend on some server out on the net rather than just pointing it at my own server inside the building?), or I'll have to jailbreak it and write some code.