As you are probably aware, there's an election coming up. DNA Lounge (and most of your favorite nightclubs) are in District 6, and as Chris Daly has reached his term limit, we will be getting a new Supervisor.

DNA Lounge is endorsing Debra Walker, Jim Meko and Theresa Sparks for the District 6 seat on the Board of Supervisors, and we encourage any of you who live in District 6 to vote for them. Since the election uses ranked-choice voting, you can vote for all three.

Specifically, we implore you to vote for anybody but Jane Kim.

(Which is to say, vote for the people you think are most likely to win, who are not named Jane Kim.)

She sounds good on paper, but in reality, a vote for Jane Kim is a vote for David Chiu. Until very recently, her endorsements page consisted mainly of a smiling picture of her and Chiu. They are apparently real-life best buds. Chiu, in case you haven't been paying attention, is the biggest enemy of nightlife we currently have in City Hall. He spent many months gunning to disband the Entertainment Commission (only reversing his position once he saw which way the political wind was blowing) and every time he makes a speech in public, he is still saying that "we have to do something about these clubs" because "people are getting shot at nightclubs once a month", which is demonstrably false. He keeps saying this in public even after having been called out on it, because that kind of "tough on crime" rhetoric is what sells. He was also strongly in favor of the (fortunately vetoed) alcohol tax, and is still flogging this idiotic "promoter permit" idea.

Kim has said and done nothing to suggest that she will do anything but vote in lock-step with him. Specifically, at CMAC's "meet the candidates" meeting, the other District 6 candidates seemed passionate and interested in nightlife issues, and Kim had only unconvincing platitudes. "David Chiu and I don't agree on everything!", she defended.

We believe that voting for Jane Kim will give David Chiu two votes in the Board of Supervisors, whereas, we would prefer for him to have zero. We do not believe that Kim will represent the needs of District 6's nightlife community.

Here are the Bay Guardian's endorsements. Aside from Chiu, you won't go too far wrong voting along with them.

Also: photos are up of Saturday's Bootie versus Hubba Hubba Revue Pirate Show. MC Cap'n Kingfish gave me this hilarious account from his point of view from the stage: 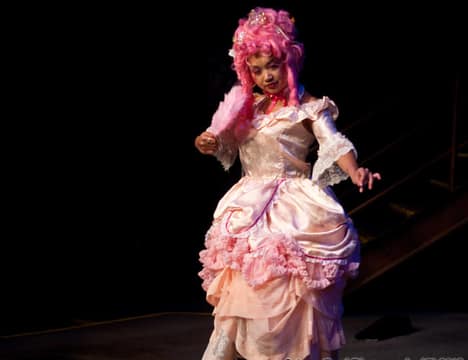 Adrian gave me a list of announcements to rattle off after our show was over, and after we, the cast, had handed out the box of freebie Bootie CDs. The announcements were blah blah this, and blah blah that, and now the show's over and you can come up and dance on the stage!

We were instantly swarmed! John-John hit the music at the exact perfect moment as I was making that last announcement, and the second it started the audience roared up both staircases, completely cutting off all the Hubbas on stage and trapping us up there. I literally saw a wide-eyed Comrade Tang disappear under a wave of people! Next, imagine trying to exit the stage with a group of barely-clothed burlesque-girls and one barely-clothed burlesque-boy while a hundred ravenous male and female versions of the "Night at the Roxbury" guys are all simultaneously and feverishly disco'ing right into you! We all sort of screamed like Ned Flanders. Totally awesome night.

That's just how we roll.