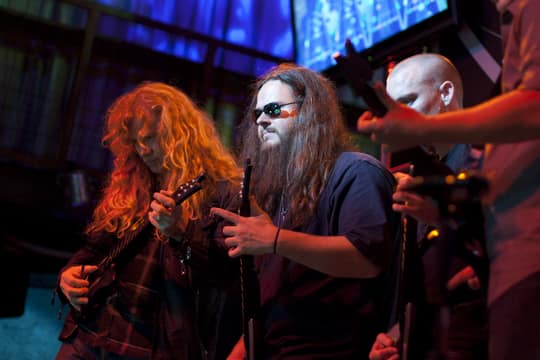 That's a photo of Dave Mustaine on the DNA Lounge stage playing Guitar Hero to a Megadeth song. I believe he scored 88.

Last month we had a press event for some new Activision games: "Guitar Hero: Warriors of Rock", "GoldenEye 007", and "Blood Stone". I just posted my photos of it. (I only just posted them because they were pretty secretive about the whole thing, and I kept forgetting to dig up the paperwork and find out what their actual embargo date was...)

It was a neat event. They spent two full days decorating the club and doing set-up. I think that's the first time we've had someone do a two day rental just to have extra time to decorate! It paid off though: they made the place look great. They brought in a bunch of couches, curtains and (of course) monitors and broke up the upstairs into cozy alcoves. I always enjoy it when someone puts the work in to transform this space.

One of the "venues" in the new Guitar Hero is CBGB's. But it's CBGB's from some alternate universe where instead of being a three-foot-wide hallway, it's bigger than the Warfield.

I wonder how we get DNA to be a venue in one of these games? We have a very nice logo -- and that's all they use, so we're set!

(You may recall that DNA Lounge was featured in the introductory video sequence to Guitar Hero competitor "SingStar Amped" back in 2007. We are available, as always, for all of your video game cut-scene needs.)

My favorite review of the event:

Dave Mustaine, and/or the girl he was with smelled very nice. I know that sounds weird. All I know is I walked down a set of stairs behind them and something nasally pleasing wafted up to me.

People who enjoyed reading this blog post will also enjoy:

Ümloud! on Thu Dec 9, where you will be able to play Rock Band on our stage for charity. It was very entertaining last year, especially the costumes.