Last week we rented a scissor lift and started doing some sound treatments on the ceiling. The interior surface of our ceiling is corrugated steel. We've begun filling in some sections with fiberglass insulation behind wire mesh -- the same stuff that is on the walls in the entry hallways. This will make the room less reflective and hopefully easier to mix. 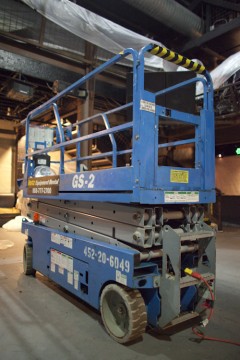 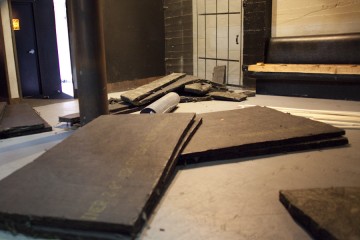 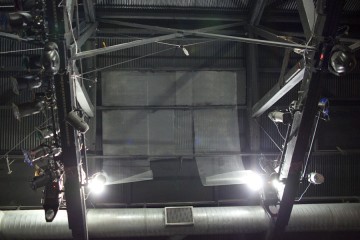 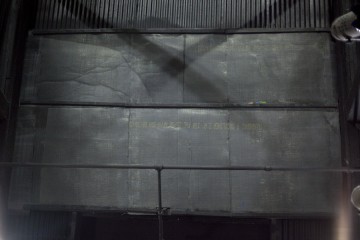 It's very time-consuming and messy. The gang didn't get very much up before we ran out of time, so we'll have to rent the lift again and finish it the next time we have three days of downtime, which currently is looking to be October! Which means our calendar is pretty full, which is nice to see. 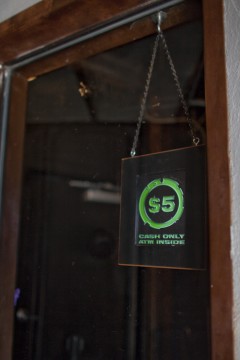 Also, we've thrown a little gratuitous technology at the ticket booth: instead of having a bunch of pre-printed paper signs with the door price on them that get taped to the window, we got a little digital picture frame and loaded it with images of every possible price. Counter-inuitively, this will actually save us a little money, because those paper signs got accidentally thrown away all the time, and toner and laminating sheets aren't cheap.

On Monday, the Board of Supervisors is voting on that new alcohol tax. It would be helpful for people to show up to the hearing and object to it, for example, on the grounds that putting the screws to small businesses during a recession is perhaps not the best idea. Nor is taking political advice from known prohibitionists like the despicable Marin Institute.

If you can't attend, do at least email the supes and tell them that you object to this new tax.

Also, please be sure that you refer to this tax as a TAX. It turns out that the Board of Supervisors aren't allowed to impose taxes, so they are trying to weasel around that by refering to it as a "fee" instead.

One of the reasons that they are trying to ram this through so quickly is that they only have a few weeks in which they are allowed to add new "fees", and after that, there will be a ballot measure to decide whether the Supes should be allowed to make up fees on their own, or whether the public gets to vote on them too. That measure is expected to pass, so Avalos wants to push a bunch of fees through prior to the requirement to involve those pesky, pesky voters. He actually says this out loud!

The terms of the tax are complicated, because the rate is based on ethanol content, so higher proof alcohols have higher tax (liquor versus beer, for example). In the end, the tax itself will come out to an average of around 5 or 6 cents per drink. That doesn't sound like a lot, right? Well, since the tax is on the local distributors (being a San Francisco-only tax) and is also complicated, they're going to have to hire something like ten more people to do nothing but ensure compliance with this new SF-specific complication. Guess what, it turns out that supply chains aren't free! By the time they pass on just their costs to us (assuming that, out of the goodness of their hearts, they would choose to pass on only that cost, and not also maintain their profit margin) that will end up costing us closer to 25 or 30 cents per drink. Our margins aren't that high to begin with, so we can't just eat that new expense. That means our drink prices will have to go up.

And since we are a cash-only operation and don't deal with coins, all of our prices are multiples of one dollar. So if this passes, expect most drink prices to go up by a buck.

The report that the Marin Institute prohibitionists funded to justify this tax is actually kind of interesting. They had to sell the City on the notion that increasing the tax on alcohol sales would net them a lot of money, so they had to go and do research on how big the actual market is -- something that "our team" had never done before, because funding studies like that is very expensive. Well, their report tells us that bar and restaurant alcohol sales alone bring San Francisco something like $75 million per year in taxes already!

So when people try to argue that the nightlife and entertainment industry is not a major contributor to the city's economy, now we have some real numbers to point to and say "you're crazy, look at what our bar sales alone account for, before you even factor in everything else like ticket sales, food, parking, etc." So even though they commissioned this report to hurt us, there are some facts in there that help us.

Also last week, the Board of Supervisors voted to grant the Entertainment Commission the authority to actually revoke the permits that they issue. This is probably a good thing, since it makes it possible for them to be a more effective organization, and without that there would continue to be a push to give control of permitting back to SFPD, which would be horrible.

It looks like Seattle may allow bars to continue serving alcohol past 2 AM -- and their mayor is behind it! Why, the very idea.

The association says it believes Seattle would be much better off if it let the market dictate when bars close ~ saving police and neighborhoods from the flood of patrons who spill out onto city streets after the mandatory 2 a.m. last call.

And I overlooked this one, in Best of the Bay last week:

Best Fighters for our Right to Party

For the last several years, we at the Guardian have been on an often lonely crusade to highlight and repel the various assaults on nightlife, special events, and the urban culture of San Francisco, from the "Death of fun" (5/24/06) to the "New war on fun" (3/2/10). The attacks come from intolerant neighbors, aggressive cops, grandstanding politicians, and persnickety bureaucrats, and they've succeeded in shutting down events (such as Halloween in the Castro), clubs (Caliente), and private parties. But party people have finally organized and fought back, this year forming the well-funded and widely supported California Music and Culture Association to advocate for keeping the fun flowing and give the party purveyors the advice, support, and allies they need to maintain San Francisco as a world class city that isn't afraid to throw great parties. The association also functions as a network of promoters, club owners, and DJs who aren't afraid to speak out for the right to shut up and dance.