Hey, check it out, our sign lights up now! There are a pair of fluorescent tubes with green gels on them lighting the wall behind the sign. 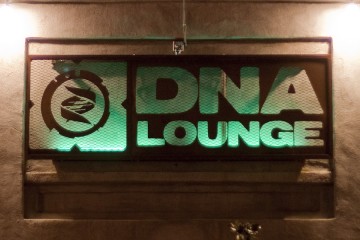 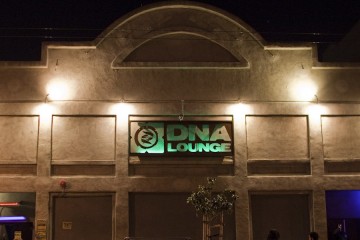 I am extremely pleased with this.

Here's an old story. Have you ever noticed this thing? 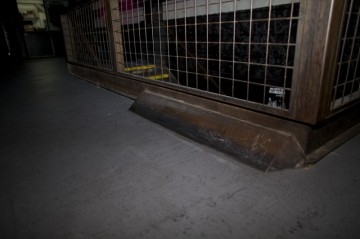 I've realized that I never told the story of this "unique architectural feature" here at ye olde DNA Lounge. I guess at the time I was still too traumatized by it to write it down. Well, the story goes like this...

Originally, back in 1999, our plan was for the main stairs to be basically the same as they always had been since the club opened in 1985: a straight stairway, touching down about ten feet away from the south door (which we call the "back" door, since it's usually the exit.)

But, once we realized the extent to which the SFPD were fucking us with respect to sound-proofing, we ended up designing in some additional concrete walls around our two doors to serve as sound baffles. This meant that the main stairs would either have to start much farther back on the balcony, or turn. Turning them seemed easier, and saved some floor space, so that's what we did.

A year of remodeling went by, and as it turned out, the stairs were the last thing to go in. The hole was already cut in the balcony floor, the railing around it was in place, and the concrete wall had already been poured.

So of course it was only at this point that we discovered that the measurements on the blueprints did not quite correspond with reality, and were we to put the stairs in as designed, the clearance between the stairs and the balcony would be less than that mandated by the building code. You can solve this kind of problem in a few ways. You can make the bottom run of stairs steeper, or less deep... but pushing those to the legal minimum didn't do enough. Or, you can make the top run of stairs steeper, resulting in the landing being smaller and lower... But that didn't help enough either. Also there are all kinds of other crazy rules, like, the stairs going into and out of a landing must be the same width.

Another approach would have been to move the top run of stairs east, toward the stage, which would have resulted in the landing being lower, with more stairs on the top run and fewer on the bottom... But that wasn't possible because one of the balcony support girders was in the way. The hole couldn't be moved any farther east. 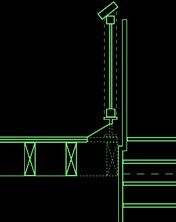 All of this was happening about a month before we were supposed to open. We spent days measuring and doodling and trying to figure out a way around all of these conflicting requirements. Finally what we came up with was this: we removed one of the floor joists; cut out the floor above the top step on the bottom run; cut away the bottom half of the girder at the base of the railing; and filled the hole with an angled sheet of 1/8" steel. That gave us the clearance we needed above each step!

To our great relief, this was deemed legal, because I have no idea how we would have solved this problem otherwise. We were in a complete panic there for a few days, thinking this nonsense might actually delay our opening by who-knows-how-long.

In addition to this drama with the stairs, another bit of fallout from having to build that stupid concrete sound-wall is that it caused us to waste 25% of our main bar. Before we realized that we had to turn the stairs, the bar was designed with four bartender stations. After the stairs were turned, that still looked fine on paper, but we learned on the first night we were open that bartender station nearest the exit door is completely useless, because if people stand there trying to get service, they completely block the exit. So that station (including sinks, soda guns, and the various accoutrements) went unused for nine years, until we finally removed its ice well and replaced it with a storage cabinet a few months ago.

Even with no bar service there, it's still something of a bottleneck. If you've ever stood at the far left of the bar, you may have noticed that there's an uncomfortably bright light shining directly in your face. We call that The "Don't Fuckin' Stand Here" Light.