You may recall that last month, we got our second ticket for allegedly "blocking the sidewalk" (which we weren't). The previous ticket we got for that same bullshit charge became mysteriously invalid with no explanation of what exactly that means. 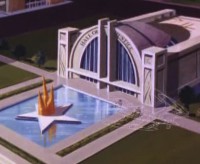 Well, David and Barry went down to the so-called Hall of Justice yesterday to try and deal with this second ticket, and were told: "It's not in the system yet, but you can pay it now anyway. It will be $169." (Paying it doesn't mean we can't still get a court date to fight it: if you dispute a ticket you have to pay it first anyway.)

In hindsight, it occurs to me that if they had waited to pay it until it was "entered into the system" we might have found that it would never actually be entered into the system, or that it would have again been mysteriously "invalidated". I assume that paying it has made it "real". But, whatever; they had already waited in line for hours to get this far. That isn't free.

Now that I think about it, I believe this is the very first "valid" SFPD citation we've ever gotten in the nine years that we've been open.

Also, photos are up of the recent Hubba Hubba, Bohemian Carnival, and Fog City Wrestling shows.