Remember that citation we got last month, which may or may not have been for "failing to keep the sidewalk clear" at 12:45 AM on New Year's Eve? Well, the court date was this week. Barry showed up at 8 AM and spent many hours waiting first in one line, then being told to wait in another line, and then a third line, where finally the clerk looked at the ticket, typed in its number, and said, "This ticket is invalid."

"What does that mean?", Barry asked.

"It means you don't have to do anything. Here's your receipt, zero dollars due."

"But, invalid how? What makes it invalid?"

"Look, I'm not going to play detective here", she said.

After some more non-answers, he was finally told to come back on Thursday, where he wasted another half day trying to get a whole gaggle of clerks to explain to him what was invalid about it. As far as we can tell, from the not-very-communicative hints that were dropped from behind the bulletproof glass, "invalid" means either: the citation was never entered into the system in the first place; or at some point, someone reviewed it and clicked the "Invalid!" checkbox.

(You'd think that if someone manually invalidated your citation -- meaning that you didn't do anything wrong, and it was wrong for you to have gotten the citation in the first place -- they might do you the courtesy of calling to let you know that you don't actually have to show up at 8 AM and waste half your day. But no, that's apparently not how it works.)

So, my assumption is unchanged: that the issuance of this citation was pure harassment. Officer Bertrand wrote it knowing full well that it would not be prosecuted, and that he would never have to defend his claims in front of a judge. I believe that Bertrand and Ott showed up at DNA Lounge on New Year's Eve with the intention of citing us for something, and when the only thing they could come up with was something that they knew wouldn't stick, they wrote us this "fake" ticket solely to flex their muscle and waste our time.

We have heard many stories of this kind of thing happening to operators of other venues over the past couple of years: tickets that, once you get to the front of the hours-long line, turn out to not really exist at all.

Most people are relieved when this happens to them, because it means they "got off easy". Personally, I'd rather fix the broken system that allows this kind of harassment to happen in the first place. 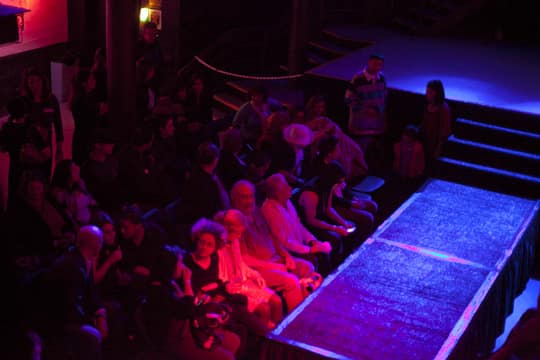 Photos are up of Debut, the SFIEC Hair Show. It was cute. A couple times a year, the students of the cosmetology school down the street put on a show. They arrived at DNA at 9am and spent all day doing hair, and then in the evening, put on a fashion show, with a runway coming off of the stage and everything.

This year we managed to not blow any circuits with all the hairdryers running all day. Go us.