Ladies and Gentlemen, direct from abc.ca.gov:

The Neighborhood Market Association (NMA) presented the awards to Director Hardy on Friday, January 22, 2010 because of efforts by the ABC staff and Hardy's individual efforts to assist small businesses in California. [...]

The award was given at the NMA banquet at the Town and Country Hotel in Mission Valley (San Diego). A video that included an interview with Director Hardy was shown. This year's banquet theme was "We Are the World: Serving the Communities We Do Business In."

I must say, as a small business owner, I feel "fortunate" and "assisted" by this agency and this director. "Assisted" good and hard. 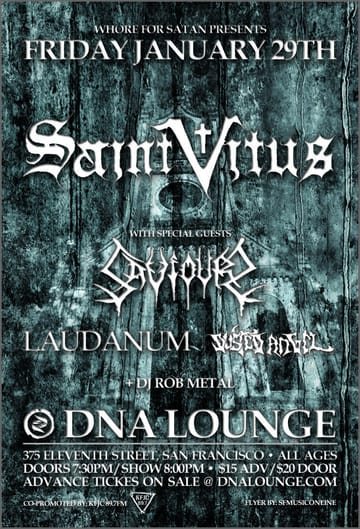 Their "assistance" has given us the "opportunity" to do some repairs and remodeling during the last 25 days, and we will be re-opening tomorrow night. Perhaps you have heard? Our re-opening will feature the dulcet tones of Saint Vitus, a musical group performing compositions in the genre of "doom metal".

I don't know about you, but I plan on having a tasty beverage or two.

We've still got boxes of these fucking "Save DNA" t-shirts. Buy them so we don't have to throw them away, ok? These things have a shelf-life are soon to be collectors' items!