Ladies and Gentlemen, I want to assure you that what you are about to see is not true. It is an optical illusion. A mass hallucination. Swamp gas from a weather balloon was trapped in a thermal pocket and refracted the light from Venus. 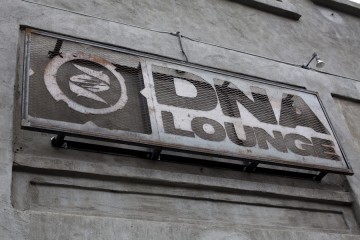 I wrote about the nine-plus year Curse of the Sign almost exactly a year ago, and shortly after that, I was contacted by one Matthew Borgatti who apparently fears the wrath of no gypsy. The Curse took its toll on him by causing his plasma cutter to break as soon as he agreed to take on the project, but six months later, to the shock and disbelief of all involved, we had a sign! All that remained was to get the permits and actually hang in on the building.

In the fullness of time, we got the permits, but what remained was finding a contractor willing to bolt the thing to the building. It was somewhat important to have an actual contractor do this, rather than just some guy with a drill, so that if the sign falls down it's a matter for the contractor's insurance and not ours.

Well. We went through three different contractors who all said some variant of, "I didn't make that sign, so I'm not going to guarantee that it won't fall apart. But I'll tell you what I will do, I'll throw your sign away and make you a brand new sign at only 10× the price you've already paid, how does that sound?"

But! Finally, we found a contractor who said, "Nah, that's sign is fine" and put it up, insured and everything. There was some more comedy involved in getting Sign Guy #3 to stop holding our sign hostage and actually allow Sign Guy #4 to walk off with it, but Holy Fucking Shit, Houston. DNA Lounge Has Sign On Building, Over. And Matthew deserves much of the credit, not only for actually constructing the sign, but for tracking down all the people who were willing to even entertain the possiblity of bolting it to the wall.

Fear not, though, that other sign will be going back up for the remainder of this month during which our orifices are being forcibly distended.