Well, that's it, we're closed until the end of the month. 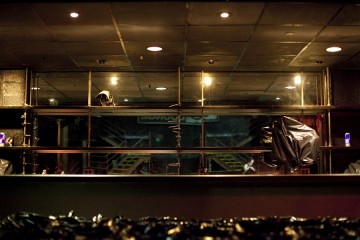 That is what a bar looks like when it is not a bar. I haven't actually seen that mirror in nine and a half years, because there are always hundreds of bottles in front of it.

During our downtime, we'll be doing a lot of repairs. Most of it probably won't be anything you'll notice. There will be a lot of general maintenance of the sort that we do continuously, but we'll be catching up and doing a bunch of it at once. There are a few areas where the downtime will be marginally helpful (for example, we'll be able to give the floor a thorough painting and give it plenty of time to dry) but mostly it will be work that we could have done any time. But we're doing it this month because that at least gives a few of our employees the opportunity to clock in and book some hours so that they don't all have to go file for unemployment right after the holidays.

Let's not forget that the ABC prohibitionists are not just screwing over us small business owners, and generally trying to destroy San Francisco's entertainment economy, they're also directly screwing over everyone who works here. Your tax dollars, hard at work.

I will end up needing to write a personal check to cover all of those salaries and repair materials, because that's what happens when you find yourself doing a bunch of repairs during a month when you have no income at all, but still have insurance, taxes, and rent to pay. Good times. Good times indeed.

Anyway. Some photos are up of Bootie's "Capricornukkah" party last week.