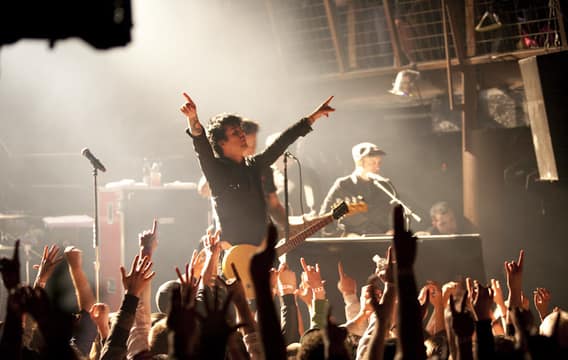 Photos are up of Thursday's last-minute Green Day show. Yeah, Green Day! How did that happen, you're probably wondering? Long story: They called us the night before and asked. Ok, it's not such a long story.

We had to cancel an event that we had scheduled for that night, and it's always a drag to have to do that, but the event we had was probably going to only get a hundred people, and Green Day sold out in 15 minutes on the day of the show. What are you gonna do?

It was a fantastic show. They played for almost three hours, including the entirety of their not-yet-released new album.

The sound quality was amazing. I don't think I've ever heard it sound so good in here.

My favorite part was when an 8-year-old kid climbed from his parent's shoulders onto the stage and Billie Joe said to him, "Go crowd surf, little man!" and he did. People were able to hold him up with one hand because he was so tiny.

My second favorite part was when Billie Joe forgot the lyrics to a song ("We've got a lot of songs!" he said) and pulled a girl up out of the audience to sing it for him. She wasn't a great singer, but she did know all the words!

We got some press on this one: New York Times, NME, and an Oakland Tribune article that was picked up in many other papers.

Like I mentioned last week, the RealVideo webcast has been (mostly) down for the last week or so, because the machine that runs it lost a drive and I haven't been able to talk myself in to the level of Linux-based self-abuse that would be required to get it working again. I did try moving RealVideo on to another machine (making the kiosk server do double duty as the video encoder) but that machine just isn't fast enough to do both. And audio isn't working on it. And you remember how I love diagnosing Linux audio problems.

I don't have access to any logs that would tell me the relative popularity of either the Justin.tv or RealVideo streams, so I can't really tell whether anyone is watching either of them. If there is anyone out there who can think of a reason to keep the RealVideo stream going at all, please speak up now.