I'm at South By Southwest. I came for the whole thing, Interactive, Film and Music. The Interactive and Film parts are still going on, and Music starts up in a couple of days. I don't really care about any of the computer conference part of it, but I came early because I just needed to get out of town.

Austin is a pretty amazing city. The density of music venues is like nothing I've ever seen. I know we're here during a gigantic music festival, but this infrastructure doesn't just go away. I wonder what it's like at other times of year. Even though the music part of the festival hasn't even begun yet, the nightlife is just crazy. We've hardly been to a bar or club that didn't have a capacity of almost a thousand, and they have all been divided up and laid out in totally sensible ways. 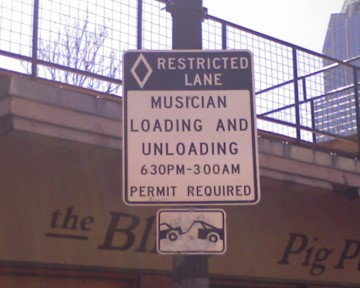 There are many things about this place that shock me. The first is to see what it's like when the local government actually supports the entertainment industry. At home, the best I can ever hope for is for them to not be an active hinderance!

Right now I am looking at a street sign - a municipal street sign, presumably suported by an ordinance and everything - that says "Restricted lane, musician loading and unloading".

I am not making this up!

Another thing I find really striking is the almost complete disregard for safety and accessability. For example, a lot of this neighborhood consists of converted warehouses, so the sidewalks snake up and down the loading docks, with crumbling stairs and ramps at the street corners. This means that the main entrances to many bars and restaurants are on sidewalks where, four feet out the front door, there is a six foot drop to the street. With no railing.

Now, that doesn't sound like the best idea, granted, and accessability is nice, but think about what that lack of railing means. It means that someone opened a bar and at no point did a bureaucrat force them to spend money to protect people from themselves! It also brings to mind the image of a cop saying to a fallen drunk, "Well what'd you go and do that for? Guess you'll look where you're going next time!"

There is a dramatic lack of nanny-state here. And it seems to work just fine.

Also shocking: I have yet to see any bar or club employee treat anyone badly in any way.

Some guy threw up on himself and passed out, and before they carried him out, they wiped off his face. And they were smiling and kind the whole time.

After they were done, I said to one of the guys, "Hey, were you the one who threw that guy out?" He said, "We prefer to think of it as 'helping him out'." Oh man. He really said that. And then I just started gushing about how amazed I was, since I can't seem to get my staff to consistently be nice to anybody. It's a constant battle.

So all of these experiences say to me that Austin understands that having an entertainment industry and a vibrant nightlife actually makes the city better, rather than being a blight that must be destroyed at all costs.

San Francisco: You got served.