<< Jan
Mar >>
DNA Sequencing
with your host
Jamie Zawinski
Support DNA Lounge!
Your donation helps ensure that we can continue bringing you the kind of awesome, eclectic and weird events that you've come to expect from us! Your donation keeps us independent, and lets us continue to take chances on the kind of local live entertainment that makes San Francisco great. Won't you pitch in?
To support us on a monthly basis, please subscribe to the DNA Lounge Patreon!
7-Feb-2009 (Sat) Wherein brains. 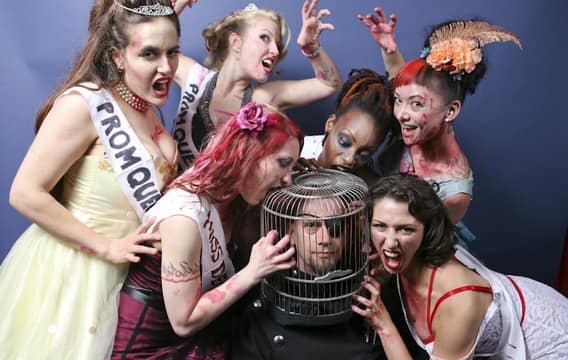 Oh hey, more zombie photos have arrived! They're at the bottom. I also forgot to mention the Seabound + De/Vision photos from a few weeks ago, and I recently added some older galleries that I scraped out of the fetid bowels of myspace of the last few months' worth of Super Egos and Death Guilds.

Here's what I've been dealing with for the last few months.

The California Department of Alcoholic Beverage Control is trying to put DNA Lounge permanently out of business. They are accusing us of "running a disorderly house injurious to the public welfare and morals", and are trying to permanently revoke our liquor license.

We're fighting this, obviously. The appeals process will be lengthy, and even if everything goes wrong, we're not going anywhere any time soon. We are open, and will remain open for the foreseeable future.

DNA Lounge has been here since 1985. I purchased the club in April 1999, and we re-opened for business in July 2001, with a Type 48 (bar, 21+) liquor license. Over these many years, the club has operated as a combination of a dance club and a live music venue.

In April 2007, we applied to the California Department of Alcoholic Beverage Control (ABC) to exchange or convert our Type 48 liquor license (bar / 21+) to a Type 47 (bona fide eating place / all ages). We did this to focus more on live music, and being an under-21 venue is critical to that. Despite the support of both SFPD and our neighbors, ABC rejected our application. We appealed.

As a direct result of our having filed an appeal, ABC began sending undercover agents into the club during our gay and lesbian promotions looking for dirt. As far as we can tell, undercover agents were present at Escandalo and Cream events during March, April and May of 2008.

On July 9, 2008, we had a hearing to contest ABC's denial of our license conversion, and we reached a settlement with ABC. On Aug 14, 2008, our petition to convert our Type 48 liquor license to a Type 47 was finally granted.

However, on Aug 6, 2008, we received a citation from ABC for "lewdness", "discrimination", and "running a disorderly house injurious to the public welfare and morals"!

The facts are these:

Here's an example of the kind of accusations that are in ABC's documents:

Later, S-6 and S-7 left the stage and S-1 (now wearing fluorescent green underwear), S-8, and the night's host "Lola" came on stage. S-1 and S-8 both pulled down the back of their underwear fully exposing their buttocks multiple times in violation of Rule 143.2(1). Also while on stage I observed S-8 get behind "Lola" and simulate having sexual intercourse by grabbing "Lola's" shoulders and thrusting his pelvis against "Lola's" buttocks several times in violation of Rule 143.3(1)(a). During this time S-1 was in front of "Lola" facing him/her and "Lola" was grabbing his bare buttocks in violation of 143.2(3) and 143.3(1)(b).

So that's the sort of attitude we're up against.

We have always told our outside promoters that nudity is not allowed. Our policy has always been that when our staff sees nudity, they tell the person in question to cover up, and if it happens again, that person is kicked out. It's not like these guys were running around naked. According to ABC's testimony, the exposures lasted 2-3 seconds, or "sometimes 20 seconds". So in a room full of people, the undercover ABC agents saw some brief flashing that our security happened not to notice.

ABC claims that we are responsible for these incidents, even though they didn't involve our employees, and we tried to prevent them.

In years past, ABC's standard penalty for these sorts of violations at actual strip clubs had been as little as a small fine plus one year of probation. This time, ABC is asking for the maximum allowable penalty: outright revocation of our alcohol license.

Because this is our first citation in eight years of operation, and because we clearly took steps to avoid and correct the offenses, we see only two possible reasons for ABC taking such a hard line. We believe both are probably true:

We will be fighting this for some time. It's going to cost me a lot of money.

Is this the kind of thing you think the State of California should be spending your tax dollars on during a recession and budget crisis?

A lot of you have been asking me how you can help us out with our ABC problems. Thank you very much for that! I didn't include that detail in my last update because, frankly, we're still trying to figure that out. However, for now, probably the best thing you can do is to write to the San Francisco Board of Supervisors, specifically Ross Mirkarimi and Bevan Dufty, and let them know what you think about how ABC has been treating DNA Lounge.

There will probably be other ways you can help in the future, so stay tuned...

For those of you just tuning in because of the recent drama, I should let you know that this here blog is usually about less significant things than our catastrophic legal battles. Mostly I write about the daily goings-on here at the club. This is one of those trivial entries. 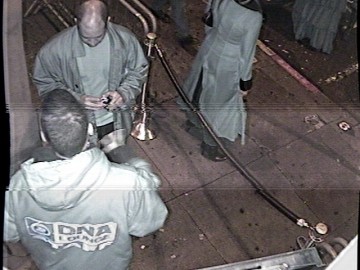 So. In less controversial news, we got a new front door camera, since the old one died. The new one is kinda weird, because it's both color and infrared. Most other infrared imagery I've seen has been monochrome. These images look pretty freaky because the street comes out in normal color, but the people come out with that ghostly infrared look. 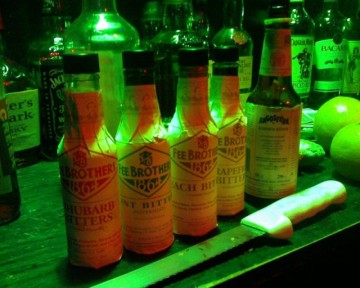 Jared, the mad mastermind behind our absinthe bar, was beaming the other day because now he has five different flavors of bitters. That's just how he rolls. The other day he was making some crazy drink involving beets and fresh ginger. Beets! But when one of my friends tried to get one, he had already run out of beets. "And to that you replied...?" I asked. I was met with a stare. "What you should have said was, bring that beet back!"

Thank you. I'm here all week.

Incidentally, we're still looking for a talent buyer / in-house booker. We really want to find someone who is currently working as the talent buyer for some other venue (not necessarily in San Francisco, if they want to move). If you know anyone, please send them our way!

Won't you please donate to our legal defense fund?

We've gotten quite a few donations so far! Thank you all so very much! You are beautiful, intelligent, and you smell great. Every last one of you. For serious.

I just created a "Save DNA Lounge" Facebook group, because I understand that's what the kids today are in to. Please join it. Bring a friend and share a miracle.

(Not to be confused with our other Facebook page.)

Thank you all so much for the generous contributions! Your help over the past few days in offsetting our legal bills means that it's going to be somewhat easier to pay our staff this month. We're not done yet, though, so please donate!

The "Save DNA Lounge" Facebook group has around 1,400 members already, which is great. Invite your friends to join! These numbers send a message.

We've gotten some publicity this week on the blogs and newspapers:

You may notice that a number of those web sites have a comments section, and that many of the commenters are saying ill-informed things like, "Well, the law's the law, and they should have known better!" Perhaps you would like to (politely) share your views of the situation on those threads.

Also, a bit of clarification, for those who might not have correctly understood my original blog post about this:

I mention these points again because I get the impression that some people don't understand the depth of the absurdity of these charges.

I didn't realize this until 30 seconds ago, but it turns out that one of the wrestlers at this month's Fog City Wrestling -- starting right now at DNA Lounge -- is Todd Bridges, who played Willis on "Diff'rent Strokes". 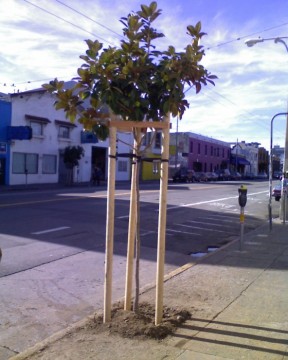 Also, the Friends of the Anemic Twig have struck again, and we have been a victim of yet another early morning drive-by tree-planting.

At least this time they seem to have reinforced it better. Maybe it will survive the first delivery truck that backs into it, unlike the last one.