Some time ago, we got a call from Friends of the Urban Forest, the folks responsible for installing those anemic twigs of trees in the sidewalks around town. They were planning on installing some trees on our street, and wanted to know if we wanted one. We said no, because our sidewalk is very high traffic at night, and it would really be in the way. And would be a tripping hazard. And wouldn't survive long anyway, what with our customers falling into it.

Six months later, they asked again. We said no again. A week after that, someone had come by and cut a big square out of our sidewalk in preparation for a tree. Apparently nobody refuses the Friends of the Urban Forest. Well, we immediately bought some concrete and filled that back in. So there.

A few months after that, one day there was a tree there. Curses! They re-cut the sidwalk and planted the tree too fast!

Surprisingly, the sickly twig they gave us survived almost a year. But, a few weeks ago, someone (probably a delivery truck) broke it in half.

Then Barry got a call from our landlord:

"Why did you plant a tree?"
"We didn't, it just showed up."
"Ok, why did you cut it down?"
"We didn't! Someone knocked it over!"
"Well, I just got a $200 fine because you cut down the tree without a permit..."
"Oh... well, it was dangling out in the street, so we cut that part off and threw it away... It was kind of a hazard."
"Uh huh. In addition to the fine, now they tell me I have to hire a professional tree remover to dig out the roots before paving over the hole."
"Wow... Can't we just plant another tree?"
"No, you need a permit for that too."

So we theorized that maybe we could dump this problem back in the lap of Friends of the Anemic Twig, but I guess our landlord is just going to say "fuck it" and pay the fines, so it's no longer our problem. But, geez...

And today, we arrived at the club to see this amazing still-life: 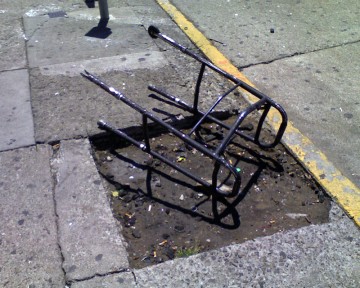 Yes, that's a walker. It's missing a wheel and it looks like it's been burned. Apparently the ghost of the tree is angry and trying to kill cripples.