<< Sep
Nov >>
DNA Sequencing
with your host
Jamie Zawinski
Support DNA Lounge!
Your donation helps ensure that we can continue bringing you the kind of awesome, eclectic and weird events that you've come to expect from us! Your donation keeps us independent, and lets us continue to take chances on the kind of local live entertainment that makes San Francisco great. Won't you pitch in?
To support us on a monthly basis, please subscribe to the DNA Lounge Patreon!
4-Oct-2007 (Thu) Wherein I try to make justin.tv go.

So, there's this web site Justin.tv that lets you stream live video through it. It started out as one guy gargoyling himself, but now apparently they're swimming in bubble-two-dot-doh VC money or something, so they opened it up to the public. Since everybody hates RealVideo, I figured I'd give a try at streaming DNA through it... and hey, the price is right.

You may notice that it says "Not Publishing" up there. It didn't say that an hour ago, when I left the club. It's totally crazy how this works: instead of there being some application that you run to stream video to them, you go to a web page and their Flash applet talks to your video input directly! Which is cute... but makes it extremely interactive and non-automatable:

So my guess is, the Flash uploader stopped running when the screen saver blanked the screen. Good times. (Oh, for the record, you have to open outbound TCP port 1935 for it to work at all.)

The only contact I've had with the Justin.tv folks was the (I assume) marketing guy who contacted me about it and gave me an invite code, which was nice of him, but he doesn't answer his mail much. Do any of you know someone technical there who might be able to help me automate this?

I'd like to make this work, because streaming video through an embedded Flash player sure seems like a better approach than RealVideo, here in this modern world. Especially when -- and this really is the most important point -- someone else is paying for the bandwidth. (We couldn't afford to do the RealVideo streaming at all, were it not for the incredible generosity of our pals at Groove Factory who have been hosting our video webcasts for free for the last six years!)

In case you were wondering, I gave up on the Justin.tv thing; consensus seems to be that there's no real way to make it work unattended. Except, maybe, if I ran Windows and spent a thousand bucks on some software, and the Justin.tv folks wrote some code on their end, then maybe that would work. But nobody has tried.

So, yeah, we're stuck with RealVideo for the forseeable future. 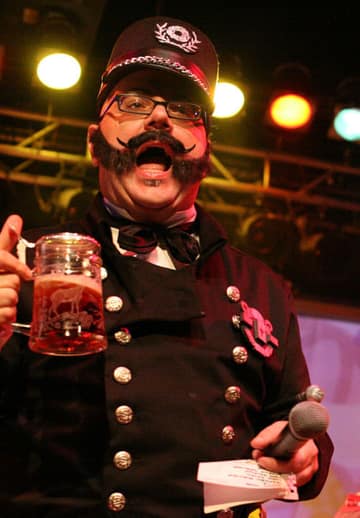 Photos are up of this month's Hubba Hubba Revue, Oktoberfest edition.

Also, there's a new feature here on the DNA Lounge web site: jwz's weekly mixtape. About once a week I'll be posting a cassette-tape-sized chunk of music that I enjoy, and that you should enjoy too. Some will be new, some old. The first one's up now, and they'll stay up for two weeks.

Please note that your upcoming plans should include Pop Roxx this Saturday (with A Kiss Could Be Deadly), and -- I really shouldn't even have to tell you this by now -- the internationally famous DNA Lounge Halloween Extravaganza on Wednesday.