Hey, the Living Dead Girlz made the Guardian's Best of the Bay:

Best Proof That The Dead Can Dance

The age-old question "Can corpses be sexy?" is unequivocally answered in the affirmative when the Living Dead Girlz take the stage. You don't have to be a necrophiliac to enjoy the shimmy-shake moves of this seven-lass troupe as they strut to spooky tunes (think Screamin' Jay Hawkins) with an undead rhythm not seen since Jacko's "Thriller" video. Though there's a Village People~esque flavor to each gal's themed character ("Cowgirl Zombie," "Pippi Long-Zombie," etc.), their unifying hotness (or is that dead, blue coldness?) is pretty much all you'll notice during their routines. A late-May gig opening for The Elm Street Murders at the DNA Lounge culminated in the Girlz chomping on one of their own -- but you never know with zombies. This is probably the only burlesque show in history where your brains just might become a dancer's din-din.

Smash-Up Derby got one too:

Who would win in a street fight, Britney Spears or the guitarist from Motörhead? What about Kelly Clarkson versus that weird stomping dude from AC/DC? The members of Smash Up Derby have been studying these bizarre hypothetical scenarios for years and have finally found the answer: both -- as mashups. A seamless mixing of the vocals from one genre with the music from another, mashups (a.k.a. bootlegs) have been around on the Internet nerd circuit for years, but Smash Up Derby is the only band that performs them live. Equal parts girly glam pop and straight-up rock 'n' roll, Smash Up Derby is San Francisco's answer to America's binary categorization problem. Gender benders Adrian Roberts and Trixxie Carr sing your favorite bubblegum tunes while the backup band grinds out classic punk rock and heavy metal, every second Friday at Bootie, America's first mashup monthly. 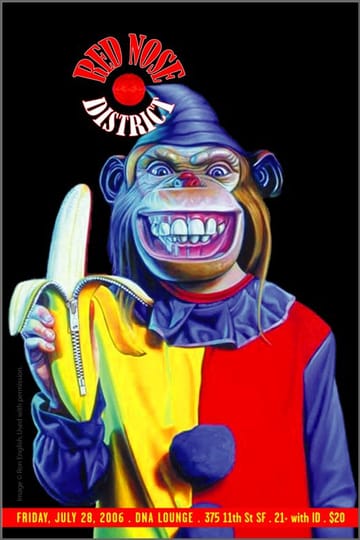 (Previously: "Best Place to See an Electronic Duo Score My Dinner with Andre"...)

You should, by the way, plan on being here on Friday night for the Red Nose District Hullabaloo. There will be clowns. Filthy, filthy clowns.