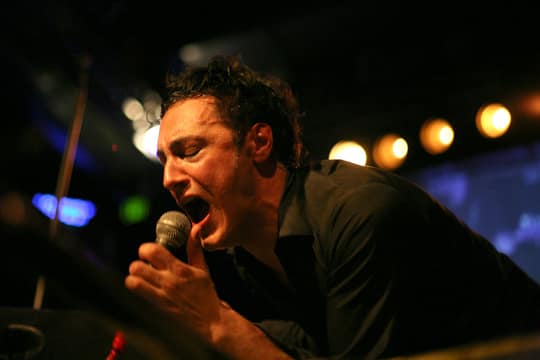 Photos are up of Death of a Party & Bellmer Dolls at last night's Swindle. Both bands were really good! They both put on super-energetic shows.

I can't figure out why Swindle is so under-attended, since it's exactly the same party as Pop Roxx, and Pop Roxx has been doing OK. So, you know, if you like Pop Roxx, you should go to Swindle too.

We're still broke. We just can't fill the room any more. It sucks. Don't expect to see freshly-painted floors or working sinks any time soon. I'm told most clubs have been under-attended lately. I guess it's nice to know that it's not just us, but that doesn't help us pay the bills. Pukey Asian Night is our only event that has been doing well in the last six months or so. Remedy used to pack this place with bridge-and-tunnel yuppies: the music was terrible, but they spent money and didn't start fights. Where did they go? Are they all just staying home now?