<< 30 Apr
11 May >>
DNA Sequencing
with your host
Jamie Zawinski
5-May-2006 (Fri) Wherein you are issued a Chainsaw Totin' Hillbilly Advisory, and webcast whinging recurrs. 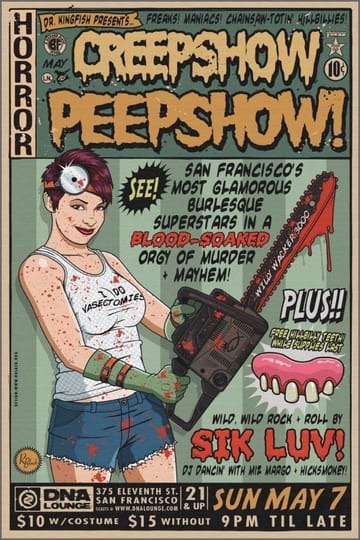 First of all, let me remind you that this Sunday is Creepshow Peepshow, our mid-year Halloween party (since having Halloween only once a year is just not often enough.)

The theme this year is "chainsaw totin' hillbillies", so y'all go get yerselves some cut-offs or overalls, ok?

It will be Legendary. Remember those other times when I told you you must come to this event and you didn't, and once you saw the pictures, you felt like an idiot? This is one of those times. Or rather, don't let this be one of those times. You know what I mean.

The webcast is still all fucked up.

While trying to fix it last week, we broke something else, and, well, remember this dingus? Well it turns out that, like so many things, it runs on pressurized magic smoke. And when you let the magic smoke out, it doesn't work any more. Getting the smoke back inside is really hard.

Me plus soldering iron, not always a good thing.

I'm thinking of making some changes to the way the webcasts work, in order to simplify things. Right now it goes like this:

So my thinking is, nobody actually cares about those extra copies of the archives. If someone wants to listen to an archive, they'll go to the archive page, not just take their chances on whatever re-run happens to be playing on the "live" stream. So I'm planning on changing it to be like this instead:

Also, I'm not sure it's even necessary to provide MP3 streams that are less than 128k. It's the twenty first god damned century, nobody's on dialup any more, right? Last month, only 10% of our hits were for any live stream other than the 128k one, so I'm considering just doing away with the others.

If you find any of this objectionable, now would be the time to speak up.

Also, if you have a Mac G4 tower you'd like to give us, that'd be great, because I want to get the hell away from Linux for the webcasts, but the club is pretty much broke at the moment. It's been an unprofitable few months.