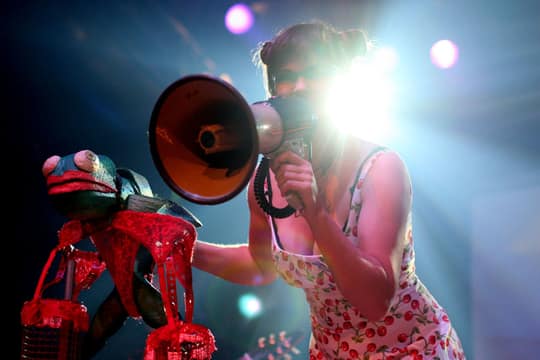 Photos are up of The Spores at Pop Roxx on Saturday. Oh man, they were awesome! Do check them out if you have a chance. Their act also included a puppet show. Which, you know, could easily have gone very wrong, but it didn't.

The webcast is still going all "test tone" on us, and I haven't the slightest idea why. It went nuts at just after 1AM yesterday, and just after midnight tonight. At first I thought it might be that LAME (the MP3 encoder) got "upgraded" and broken, but no: turns out it didn't get upgraded at all; we're still running the same binary of it that has been working fine for two years.

I'm pretty much out of ideas at this point, beyond "install a completely different operating system and hope for the best." Though "sell all the computers and just say fuck it" is looking more attractive every day.