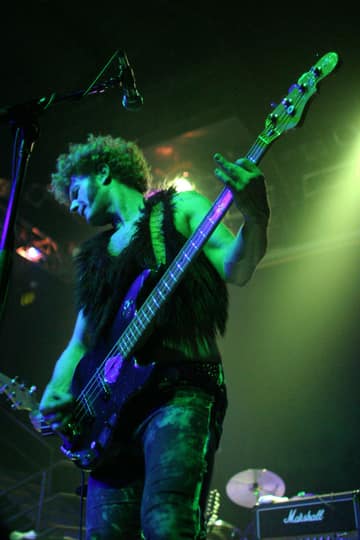 Photos are up of the Specimen + Flatline Transmissions + Deadfly Ensemble show. This was intended to be a 20th anniversary reunion show for Specimen, except that it was the whole band except for the lead singer... so they decided to call themselves "Azoic" instead (the name of one of their albums, ignoring the fact that there's an existing band called that already) And then... two days before the show, we (DNA) got a very pissed off email from Olli, the original lead singer, wondering why nobody even contacted him. Um, oops. That's pretty lame, guys...

Despite that, it was a good show. Tobias (the replacement) did a good job; they sounded just like Specimen to me.

(Olli's actually performed here on three different occasions: he does psytrance now, and sells a line of fluorescent rave clothing.)