<< Jun
Aug >>
DNA Sequencing
with your host
Jamie Zawinski
Support DNA Lounge!
Your donation helps ensure that we can continue bringing you the kind of awesome, eclectic and weird events that you've come to expect from us! Your donation keeps us independent, and lets us continue to take chances on the kind of local live entertainment that makes San Francisco great. Won't you pitch in?
To support us on a monthly basis, please subscribe to the DNA Lounge Patreon!
12-Jul-2005 (Tue) Wherein we wish ourselves a happy birthday.

Tomorrow is our fourth anniversary. Yay.

I haven't written here in a while because there's been almost nothing interesting going on, I'm afraid to say. Let's see, what has been going on?

Notably absent from that list are any bands. Looks like the last real band that played here was The Epoxies in May! (I'm not counting in my current definition of band "a dozen MCs and DJs plus one drummer", which is perhaps not completely fair, but whatever.)

DNA Lounge got mentioned on NPR this morning; you can listen here. They did a segment on Asian rock, and talked about the Wu Bai show we did in April.

A while back I mentioned how odd it was to find out that a show might not be happening because I had read about the band's car troubles on their blog.

Well, here's another, even more amusing first: I learned that Manufactura will probably not be appearing at the July 19th Combichrist show by reading his arrest report! Supposedly security at a club where he was performing in Florida tried to throw him out, and he pulled a knife on them. Good times, good times. 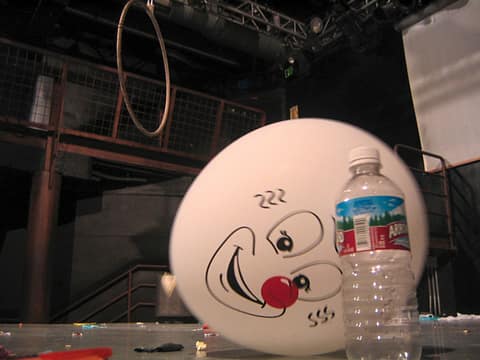 Photos are up of our recent Staff Christmas Party and Four Year Anniversary. Like last year, we had a bouncy castle and piñatas. This year, we had acrobats and contortionists. Oh yes.

If you have the means, I do so recommend picking up a bouncy castle. And I will let you in on a little secret: like many things, bouncy castles are much more fun once you start using them not as directed. For example, you might choose to ask, "what happens when you try to get on top of the bouncy castle instead of staying inside?" The answer is, "it tries to kill you!" But it's much, much more fun that way.

A few other galleries of older events have also straggled in recently: the final Remedy; the latest Pop Roxx; and the latest Dark Sparkle.

29-Jul-2005 (Fri) Wherein photos are presented, and the dark underbelly of the bouncy castle trend is revealed.

Photos are up of Pop Roxx, Meat, and last month's Digable Planets show.

In record-setting news, Devon reports that Pukey Asian Night has set a new one: not number of pukings, but this time, number of pukings on staff. That number so far is three. On armpit-to-ankle; one from above, through the stairs; and one when someone foolishly got between a girl and her intended garbage can.

The Sheriff's Office reports that about six children were injured while playing at a summer camp in Parkland. Spokeswoman Liz Calzadilla-Fiallo says at least ten children were on the slide that is designed to hold only four at a time.

The slide is about 15 feet high at its highest point. It's not yet known what caused the bounce house to collapse, but those playing on it fell into each other. Some complained of facial or back injuries.