<< Apr
Jun >>
DNA Sequencing
with your host
Jamie Zawinski
Support DNA Lounge!
Your donation helps ensure that we can continue bringing you the kind of awesome, eclectic and weird events that you've come to expect from us! Your donation keeps us independent, and lets us continue to take chances on the kind of local live entertainment that makes San Francisco great. Won't you pitch in?
To support us on a monthly basis, please subscribe to the DNA Lounge Patreon!
3-May-2005 (Tue) Wherein we find that we are big in Japan.

Well, it's the beginning of the month, and that means "time to read the web logs!" Let's start off with a handy infographic:

We served fifteen times as much traffic in April as we did in the previous month. January, February, and March were each around 2.4 million accesses; April was 37 million.

Gosh, what could have caused that.

It looks like the photos of The Event Which Shall Not Be Named were a huge hit in Japan and The Netherlands:

Also, we served 700,000  404 errors caused by people incrementing numbers on the images looking for a double-super-sekrit stash of extra pictures.

Normally the four top-ranking documents are the two RSS files, the top-level page, and the webcam slideshow image, in that order. In April, the top-level page was #6, and every other page in the top 50 was a part of that particular photo gallery.

Photos are up of last night's Pigface show. That was another really hard night to shoot. It was one of those nights where the band said, "oh, we brought our own lights, your lighting guy doesn't need to do anything." What this meant was, "we've got a couple of ten dollar strobes, that should be plenty." So, you know, everyone's ankles were extremely well lit.

Pigface always puts on a great show, though.

I've been (perhaps unwisely) messing around with the layout of the web site. Let me know if I've broken anything.

Some great (by which I mean "not great") neighborhood news: apparently there are plans afoot to build a new twenty unit apartment building on 11th Street at what is currently the smog-check garage, right across the street from Slim's. We are not pleased. The Slim's folks are even less pleased.

Come see Hungry Lucy and BloodWIRE this Sunday. I haven't seen either of them before, but I like what I've heard on their web sites. 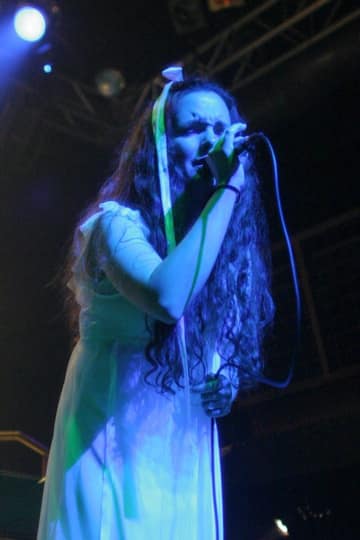 One DJ says to the other, "Do you want to go to a movie tonight?"
and the other one says, "I don't know, who's the projectionist?"

Photos are up of the Hungry Lucy + BloodWIRE show.

Also, you may have noticed that the calendar pages now have inlined flyers on them. I'm still a little conflicted about that. I think it looks good, but it tends to make the calendar pages even wider, and I think they were way too wide already. (I am not a fan of the horizontal scrollbar.)

This Sunday is the Epoxies / Groovie Ghoulies show. The Epoxies are fantastic and you must attend! You may recall me gushing about them after they played here in November.

GWAAAAARR!! These videos for Bring Back the Bomb and Womb With a View appear to have been filmed at DNA Lounge back in November!     \m/ 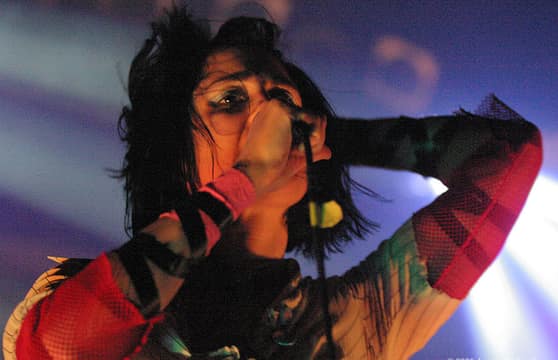 Pictures of the Epoxies / Groovie Ghoulies / Royalty show are up now. Angela took these, which means that A) I got to actually watch the show, which was a nice change, and B) the pictures are great! It was a fantastic show, too. I hadn't seen Groovie Ghoulies before, and they're a lot of fun. And The Epoxies were awesome as always. Go buy their new album.

Someone tagged the men's room mirror again; yes, the same mirror that we've only had for five weeks. Thanks, asshole, that's another $500 you just cost us. This time, they tagged it at the Epoxies show, which I guess is the world's way of rubbing my nose in the fact that tagging is so wonderfully "cross-genre" now. It's not just for wannabe gangstas any more.

We now have a newspaper rack for The Onion next to the flyer rack. I'm so glad they've started doing a local SF edition of the paper: it is so much funnier when you read it on newsprint than online. Silly gags like "Investigators Blame Stupidity In Area Death" and "Goth, Metalhead Overcome Subcultural Differences To Find Love" get at least a 20% humor boost by being printed on actual crappy newspaper-paper. We also run an ad in it now. Alas, our ad is nonfiction, but I still get a kick out of it when I flip through a paper and see one of our ads. "Hey, that's us!"

This was one of those situations where we'd love to call up and complain to the guy's boss about (shall we say) "how he carried himself", but that would just result in him being here every night for the next year.

I guess it could be worse, we could be dealing the The Sopranos instead. At least he didn't shoot anybody.