It looks like the problem with the serial port dingus was an intermittently-flaky ethernet cable. Conveniently, the cable in question was a 200' run. 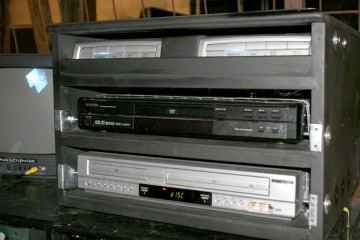 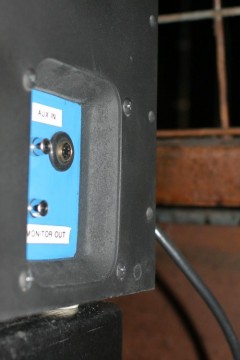 Jonathan and Devon built an enclosure for our VCR and DVD player. This should hopefully let us stop having to replace them every three months, since now the the video monkeys will have a much harder time dropping them or spilling their drinks into them. Everything is bolted down, and all the I/O is routed through a pair of front-panel switches, so people won't be able to (or need to) mess around with the back connectors (which they often managed to break.)

It's a pretty cool setup; there are two switches, one for "preview" and one hooked up to the projector. (Presumably anyone with more complicated needs than that will have brought their own gear.) Next on the list is converting the feed to the projector from baseband to s-video. Apparently you can do long s-video runs over a pair of coax cables, and that should make the picture a lot sharper.