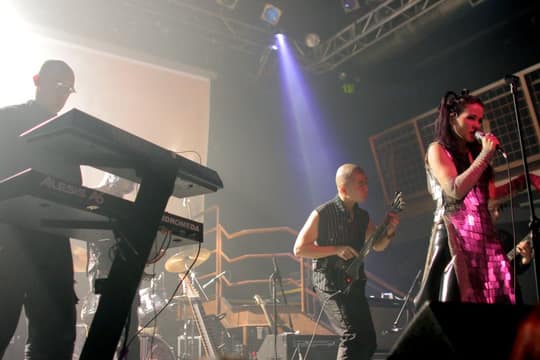 Photos of the Collide / Drop Black Sky show show are up now. I've been listening to Collide for a long time, and it was a good show, but the sound quality wasn't great. Collide wanted to use their sound guy instead of ours, and that's just never a good idea, since our sound crew are really good and know the room very well. I imagine that's not the case at a lot of venues, so it's hard to convince bands of this. Anyway, I gather that this is the first time Collide has ever toured, having been a studio-only band for a decade or so, and I was glad that they put together a full band instead of relying on laptops. One of the guys in the band played a very odd-looking kind of guitar that I hadn't seen before. The singer was wearing a dress made of razor blades. I was disappointed that no blood-squibs fired during the encore.

This was the third time Drop Black Sky has played here. They're good! They don't have an album out yet, but there are a bunch of MP3s on their web site. 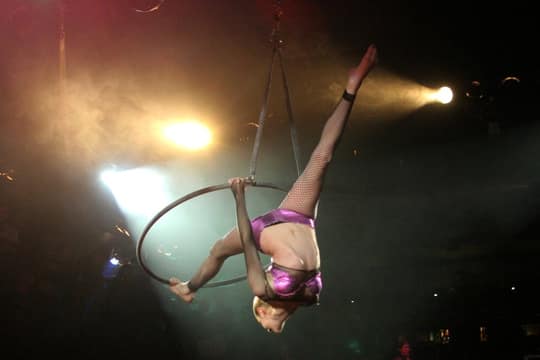 Also up are photos of the Flying Tiger Circus. This was their third time here as well, and they were great as always. Acrobats and contortionists and jugglers, oh my. I'm sorry to say that I got here late, though, so I missed the first half of the show -- so if any of you have photos of the earlier acts, please send them to me!

(I also missed the human branding part of the show, including the smell, but that's ok, because I had pork for dinner.)

I was surprised to learn that I am no longer squicked out by the bait-and-tackle show. This time, it didn't really bother me at all watching a guy dangle by meat-hooks in his back. What did get me, though, was after they took the hooks out and were squeezing the air bubbles out from under his skin. That still makes me feel all funny inside.

The mechanism for the suspension was pretty clever: the guy was hanging by a cable that connected to some sand-bags on a table. The audience threw baseballs at targets to make the sandbags drop down, which eventually hoisted Mr. Meathook.

Here's a funny story: one of the acts was the Mystic Pixies, a group of kid contortionists. So Paul, the promoter, took some of the flyers down to their circus school. Their teacher looked at the flyer and said, "I don't think that's appropriate at all!" Paul assumed she was talking about the meat-hook picture, and said something like, "well, we've been doing that for a long time, I think everyone's used to it by now..." But no, she was objecting to the picture of the girls on the other side. She said, "that's a picture of little girls having an orgy!" So he found some polite way to say, "you're insane!"

So then the girls themselves told her that they didn't see anything wrong with it either... and because of that, they got booted out of the Children's Circus!