<< 13 Nov
30 Nov >>
DNA Sequencing
with your host
Jamie Zawinski
25-Nov-2004 (Thu) Wherein photos are presented, and the bottom of the barrel is breached. 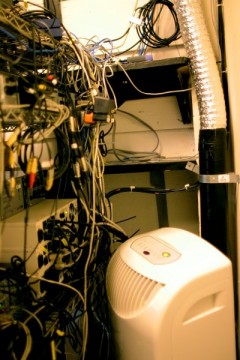 The back office (what one might laughingly refer to as the "server room") now has an air conditioner! We've reconsidered our policy of keeping the computers absolutely as hot as we possibly can, and are trying another tactic for a while. We're managing to keep the temperature down around a balmy 80 degrees, and I'm telling you, it's like the fuckin' arctic in there now. There was supposedly ventilation in that room already, but it has never done a damned thing. We've even lost track of which way the air supposedly flows in the existing ducts. Anyway, we picked up a bulbous floor-mount AC and poked its tube out the erstwhile window, so it vents into the 3" gap between the buildings. It seems to be working ok, and it has only popped the circuit breaker once.

Photos are now up of Sunday's Epoxies / Phenomenauts / Smash Up Derby show, and of Tuesday's Laibach / Bonfire Madigan show.

Smash Up Derby are pretty entertaining; they played mix-and-match covers, like the music from "Smells Like Teen Spirit" with the lyrics from "Billie Jean". The Phenomenauts are a space-themed rockabilly band, and they were a lot of fun too. One of the guys introduced a song by saying, "ladies and gentlemen, some other planets have been saying they're better than Earth, what do we think about that?" The audience booed, and they went into a song called "Earth is The Best!" 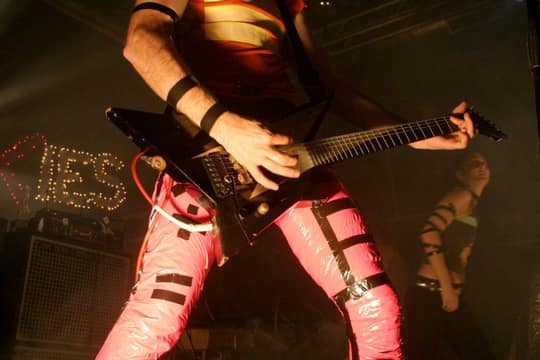 But The Epoxies are my new favorite band. (Yeah, I'm fickle.) Man, they were so great! They do a punk/new wave thing, sort of in the Devo vein. They were really energetic, totally spastic and theatrical, and put on one of the best shows I've seen in a long time. Go check out the videos on their web site, especially "Stop Looking At Me".

Laibach: I still don't get it. At all. Apparently there is some ironic appeal here that continues to go swoosh right over my head.

If you are the type to slow down and rubberneck at car crashes, then I can recommend this Saturday's event, the... "Pajama Jammy Jam". Yes, Ladies and Gentlemen, we are no longer scraping the bottom of the barrel: we have gone straight through the barrel and are now gouging great big chunks out of the floor beneath. I think it's safe to say that this will top 2001's "Naughty Christmas" as the tackiest, most tasteless event ever to grace our hallowed hall. Strong words, I know, but consider: there's a lingerie contest. And it's sponsored by a party bus company.

Here's how awesome this is going to be: you know Remedy, our stultifyingly mainstream Friday night event? The Remedy guys complained that if we do events like the "Jammy Jam", we're going to give Remedy a bad reputation.

Welcome to the next level.

In more pleasant news, here are some events that you should totally come to in a completely non-sarcastic way: