<< Aug
Oct >>
DNA Sequencing
with your host
Jamie Zawinski
Support DNA Lounge!
Your donation helps ensure that we can continue bringing you the kind of awesome, eclectic and weird events that you've come to expect from us! Your donation keeps us independent, and lets us continue to take chances on the kind of local live entertainment that makes San Francisco great. Won't you pitch in?
To support us on a monthly basis, please subscribe to the DNA Lounge Patreon!
15-Sep-2004 (Wed) Wherein photos are presented.

Photos of the Black Tape for a Blue Girl / Nicki Jaine / Drop Black Sky show are up now. 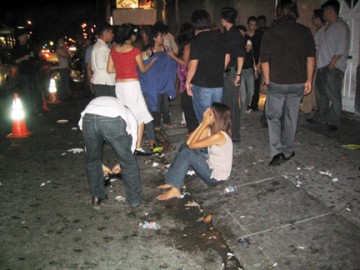 I haven't updated in a few weeks because nothing interesting has happened lately. But, as a public service announcement, let me share with you a picture that should explain why you should never, ever take your shoes off in or near a nightclub. please cast your eyes to the right:

Yes, you're reading that correctly: this girl is sitting on the curb oblivious that her bare feet are in a puddle of vomit. It's not even her vomit. Yet. 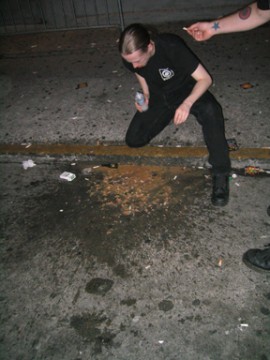 But let's not humiliate the customers and turn a blind eye to the staff: that just wouldn't be fair. Here's a picture of that same stretch of sidewalk later in the evening, where Devon is trying to get himself fired by doing some puking of his own while on the clock. He had the good sense to keep his shoes on, but he's supposed to be cleaning up the vomit, not making more. Though I guess it's more efficient this way. 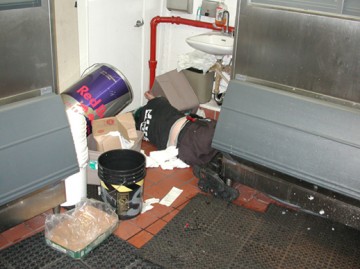 And, for posterity's sake, here's a picture from two years ago of Ron (Devon's boss) setting the "trying to get myself fired" example by passing out in, if not a gutter, then at least a drain. This was at the first Nina Hagen show, I believe. This was also the image on the cover of our christmas party invitation that year. It said, "Come have fun! But not this much fun."

Our store hasn't been working extremely well lately; it turns out this is because our credit card processor, authorize.net, have been fighting off a distributed denial-of-service attack for the last week or so. And the software that runs our store apparently just throws up its hands and gives up if the CC processor fails to respond in certain situations. Our store turns out to not be what you'd call robust. It's only screwed up a few times so far, but at least some of the time, it's been telling people that they have tickets, but then not charging them and not putting their names on the list, resulting in something less than total customer satisfaction.

Don't get talked into hosting your own store, kids. Recall that my one purpose in life is to serve as a warning to others.

In other news, here's one for all you people stinking up my sidewalk: Hard Evidence: Secondhand Smoke Is Much More Dangerous Than First Thought. "The research, published in the British Medical Journal, suggests that inhaling someone else's tobacco smoke may increase your risk of heart disease by up to 60 percent. [...] just being near someone smoking a few cigarettes a day is almost like being a light smoker yourself. Secondhand tobacco smoke exposure can give you almost the same risk of a heart attack as if you smoked one to nine cigarettes a day."

(The article didn't say anything about second-hand puke.)