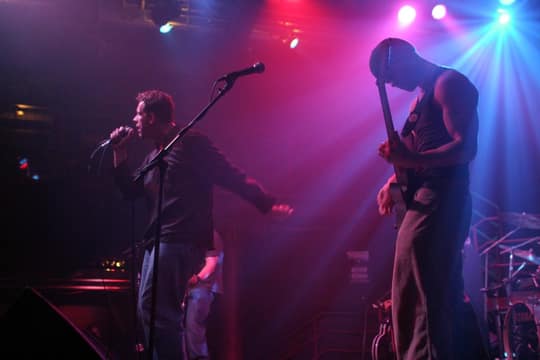 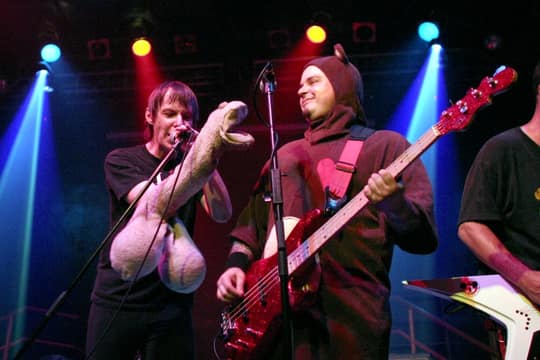 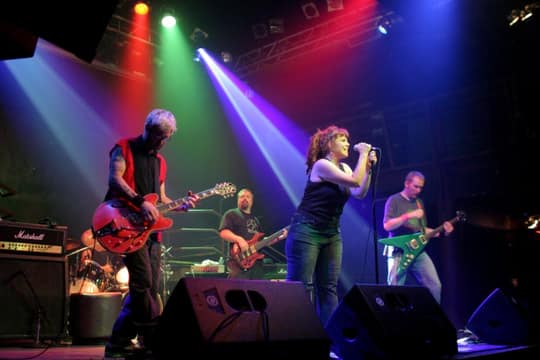 Photos are up of our previous three live shows:

I liked The Brides a lot -- they were sort of a spooky rockabilly/deathrock number.

At most of our live shows, we use the lounge for the bands' backstage area. There's a cage that goes in front of the bar to keep the liquor locked up. Well, at the Dickies show, someone with one of the bands broke through the cage and stole a few bottles of booze. This is extra lame, considering that we are always generous with the drink tickets. But hey, it's punk rock to "stick it to The Man", right? Still, given that only 150 people showed up, they might want to wait for a night when The Man was actually making any money. Perhaps they didn't realize that they had already stuck it to The Man by simply not being very popular.

They put on an entertaining show, though. The Dickies were a lot of fun.

In further jackassery news, we had another KMFDM show booked, but they canceled on us. We still don't actually have any idea why. As I understand it, the exchange went something like this:

And that's pretty much the end of that. It seems likely that all this nonsense isn't the promoter's fault, it's Sasha not giving either of us a straight answer. Oh well, whatever. It's not like I'll miss them. Their shows attracted an enthusiastic crowd, and many of my friends attended, so that was nice, but the truth is that they're an absolutely horrible live band. Both times they've played here, they've managed to make this club sound worse than anyone else ever has; it's really a good trick, especially since (at least lately) they make heavy use of backing tracks. How do you screw up so badly when you're phoning it in to begin with?

Which is just, you know, another reason for the "bootleg" fantasy to be so nonsensical. They sounded terrible in the room and even worse on the webcast.

On a more pleasant note, please to be joining us this Sunday for Spectacular Spectacular's production of Atomic Jungle! Nothing says vaudeville like south seas atomic testing, right? I saw the rehearsal, and it's going to be hilarious. This is from the mad masterminds behind Zombie DNA and Castle Spectacular.