<< Feb
Apr >>
DNA Sequencing
with your host
Jamie Zawinski
Support DNA Lounge!
Your donation helps ensure that we can continue bringing you the kind of awesome, eclectic and weird events that you've come to expect from us! Your donation keeps us independent, and lets us continue to take chances on the kind of local live entertainment that makes San Francisco great. Won't you pitch in?
To support us on a monthly basis, please subscribe to the DNA Lounge Patreon!
6-Mar-2004 (Sat) Wherein we feel the love for webcasts, paint, and urine.

Yeah, so, Yngwie Malmsteen cancelled. I'll bet you can write the story yourself:

So that's just great all around.

In better news, some filthy little gutterpunk both tagged, and then peed on, our front door this evening. Oh wait, that's not good news either! Well, if you happen to see the smirking little shitworm pictured below, please beat him to death with a lead pipe: 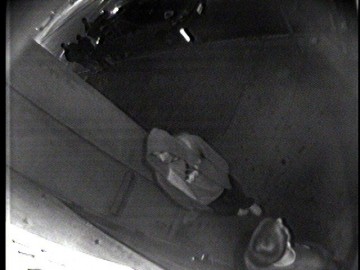 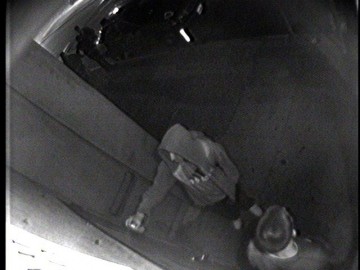 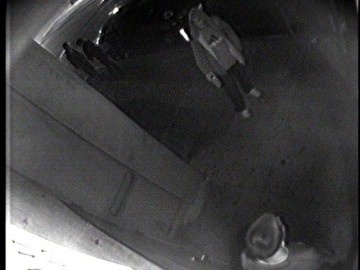 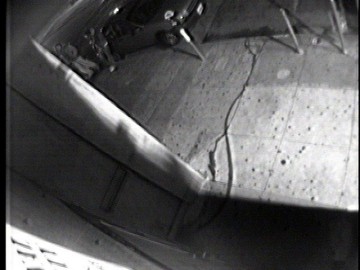 The restaurant space next door has finally reopened! Pizza and hotdogs so far. But at least they're open late...

I got a new toy: I bought a servo-mounted video camera. I'd been looking for the right one of these for a long time now, and finally found one that seemed reasonable, though it was way more expensive than it should have been... 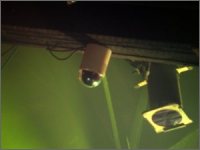 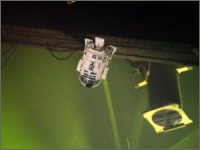 Separated at birth?
It's a Panasonic WV-NS324 dome security camera, and it looks a lot like R2D2. The nice thing about this camera is that it has a normal video output (so it works with our video switcher and webcasts) but it also has a web server built in. All control of the camera's motion is via web pages running on the camera itself (this is cool, because the fact that it's controlled through HTML forms means it's moderately easy to script.) It also can spit out JPEGs over the net, though I doubt I'll end up using that part.

The most annoying thing so far is that the joystick-like control on the built-in web page doesn't work with Mozilla or Safari. Their HTML is coded for MSIE and for Netscape 4 (with layers) but neither Mozilla nor Safari support that, so it's hard to position the camera manually.

Once I figure out the right way to use this thing, it'll be able to take the place of, like, half of our existing fixed-position cameras. We'll be able to have mutliple different presets on the stage, for example, so that when bands are on, there will be a wider variety of close-ups and wide shots.

I'm pleased to announce that the new DNA Lounge Online Store is now open for business! We've got shirts, stickers, buttons, and dog tags for sale now. (The dog tags are way cool. You totally need some dog tags.)

In addition to those fine products, we also have our first in-house ticket for sale: will-call tickets for the Sorrow / Faun Fables / Hop-Frog show on April 14th are for sale as well. Eventually we plan to sell advance tickets for every event, but we're starting with just the one.

We take Visa and Mastercard, and ship to the US and Canada. (We don't do international orders because the rates of fraud are way higher, and it's just not worth the hassle.)

We're running the store on our own servers rather than outsourcing it, since we're gluttons for punishment around here. Anyway, if you have any problems with it, or have any suggestions, please let me know...

If you're not in the US or Canada, you can still get our loot by sending us a money order. Also, tickets for the Aslan Faction / Psyclon 9 show are on sale now.

State Assemblyman Leno has introduced Bill AB 2433, which (as mentioned previously) would move San Francisco's last call from 2am to 4am. The bill will have its first public hearing on April 22.

Please send email in support of this bill! The more public support that can be shown, the more likely the bill is to pass.

The SFLNC site lists some important points that you might want to mention in your email. 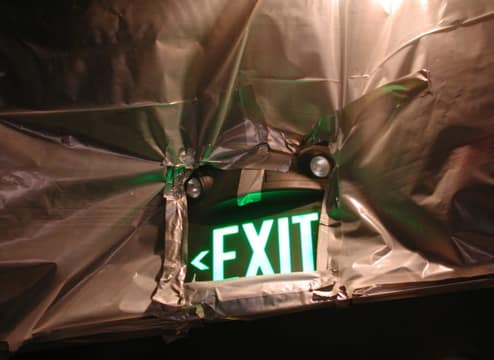 Photos are up of Exodus + Hail Satan, and Flavor.

We recently added two new shows to the calendar:

We're thinking that the preparations we had to make for the Incredibly Strange Wrestling shows will be a dry run for GWAR. But GWAR is a lot more wet. 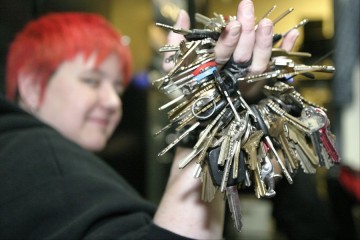 Casey has started on a new art project, pictured to the right, to go along with the Wall Of Lost License Shame (which is growing quite nicely, thank you.)

What she's holding is, I think, 1/3rd of the keys that we've found here in the last year or so.

The collected stack of abandoned cell phones was pretty impressive, too. Those got donated to a women's shelter.

We came in second on the "Top 10 Clubs to Get Piss-Drunk and Vomit At" list in SF Weekly's Self-Loathing Hipster's Guide to S.F. Night Life. Number one was an alley. Yay us?