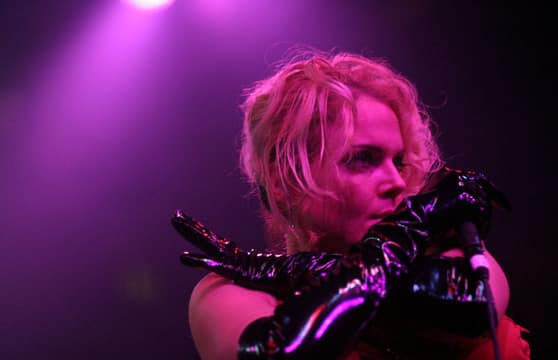 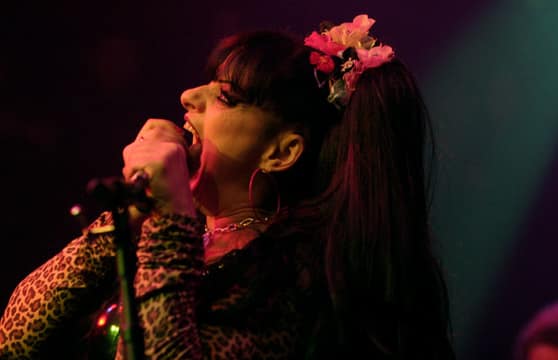 Photos of Nina Hagen / Storm and The Balls are up now. Man, what a fantastic show! Storm and The Balls totally blew me away. Most of what they played was these fantastic loungey, bluesy mash-up cover songs: like the lyrics from "Bring The Noise" with the music of "Sweet Home Alabama", and "Take a Chance On Me" to the tune of "In-A-Gadda-Da-Vida". It sounds gimicky, but they did it so well! (And this wasn't some beat-matching remix trick like that Grey Album that's getting so much press at the moment: this was the real thing.) I'm listening to the show again right now, and so should you!

This show almost didn't happen, because Nina Hagen had a lot of trouble getting her visa to enter the country. It would seem that in These Uncertain Times, our government must do its best to keep potential terrorist-slash-recording-artists out of the homeland. In the last couple of years, it's apparently become a lot harder for foreign bands to get in the country; the work visas are nearly impossible to come by, and I'm told that the old tricks that small bands used to use, like just pretending that they're going on vacation and renting instruments when they get here, no longer work.

One of the more egregious examples of this recently was when Cuban guitarist Ibrahim Ferrer was unable to pick up his Grammy award at the ceremony because he couldn't get into the country: "Mr. Ferrer can't be with us tonight".

Nina's agent actually called us to cancel this show, thinking the tour was dead, but Alexis call the Goethe Institute (who put on the Maximilian Hecker / Barbara Morgenstern show a couple weeks ago) and apparently they have some pull in situations like this... She ended up having to cancel her show in New York, though.

What a messed up world.