<< Dec
Feb >>
DNA Sequencing
with your host
Jamie Zawinski
Support DNA Lounge!
Your donation helps ensure that we can continue bringing you the kind of awesome, eclectic and weird events that you've come to expect from us! Your donation keeps us independent, and lets us continue to take chances on the kind of local live entertainment that makes San Francisco great. Won't you pitch in?
To support us on a monthly basis, please subscribe to the DNA Lounge Patreon!
9-Jan-2004 (Fri) Wherein the Wresting is both Strange and Incredible.

I'm told that on New Year's Eve, we generated 32 bags of garbage by the end of the event (well into the next morning.) Devon says:

Typically, we end up with 5 bags in the back at the end of the night, which all fit into the big trash bin back there. This time we had a literal mountain of trashbags and cardboard (from booze orders.) At it's highest, it was eight to ten feet tall, tapered down, and was about sixteen feet long. We took some pictures of it, but none of them really capture how fucking huge this pile of trash was.

Fear not, Eco-Hippies, for the cleanup crew that comes in at the end of the night actually sorts throught all of that, and picks out the recycleable items. I felt sorry for them, for when they arrived around 9AM, the rain was coming down at nearly a 45 degree angle.

This is your last reminder that this sunday (sunday, unday, nday) is Incredibly Strange Wrestling! I strongly advise you to see this show: it will doubtless be one of the top five most entertaining events we do all year. It's been a bit over a year since the last time they were here, and that show sold out, so buying tickets now would be a good idea.

This has been around for a while, but if you haven't seen it, you oughta: Ishkur's Guide to Electronic Music. It's a flash-based family tree of the nine billion micro-sub-genres, with lots and lots of musical samples from each, and excellent cynical editorial comments. 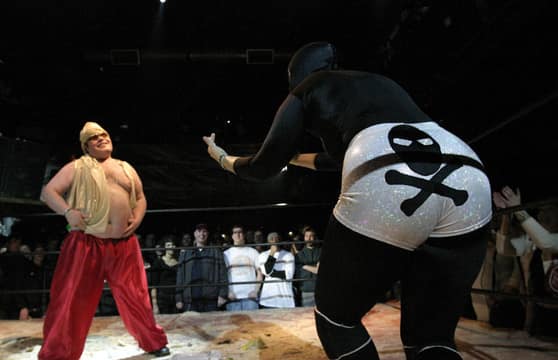 Photos of Incredibly Strange Wrestling are up now. And what a fantastic show it was! It was incredible. It was strange. And it was wrestling. The sheer volume of tortillas is difficult to express; there are still tortillas from last year's show hiding in the club, I'm sure. Fortunately, after about a week, they dry out and get crispy, so the smell fades rather quickly. Note how in the last couple of photos, the club's major crevices are swaddled in plastic...

That's Casey's skull lunchbox that "Oh My Goth" is beating his drunken fratboy step-brother with.

We did this hiphop event the other night: a bunch of DJs and MCs. One of the things that happens just before doors is that security goes around and checks the IDs of everyone who's already inside, to make sure they're all 21. Well, one of the MCs didn't have his ID. He had some long sob story, as they always do. Security decided to let it slide, since the guy was obviously in his 30s.

Now, this almost never happens: usually what happens if a performer doesn't have their ID is, we either make them go get it (which makes them hate us a lot) or we treat them like they're an 18-year-old performer, which means they can only be in the club when they're on stage; for the rest of the time, they get to wait on the bus.

So you'd think the sane thing to do would be to be lenient in these cases, right? Except we almost never do, because here's how the conversation usually goes:

So at that point, they're no longer merely guilty of not having their ID: now they're also guilty of being an asshole, which tends to eliminate any possibility of leniency.

Also, experience has shown that performers who show up without ID tend to be primadonna dipshits: the kind of person where we're actually better off having them in the building for the shortest amount of time possible, because that way they make less trouble.

But, moving right along (and I think you know where this story is going...)

A couple of hours later, one of the security guys caught MC No-ID smoking pot in the back room, and told him to knock it off. The response? "Hey, I'm the artist. That means you work for me."

Yes, he still has his teeth. That's how restrained our security guys are here.

So then he was on stage doing his little MC routine, and he was talking so much shit to the audience that by the end, the whole place was actually booing him. I haven't heard that before, even back when MC WhinyPants did her thing a few months back.

Oh, but it gets better. Apparently he pissed off the DJ so much that the DJ threw a record at him and hit him in the face! So immediately, MC No-ID was on the mic calling "Security! Security!" (Yeah, suddenly security's his best friend.)

This joker wasn't even the headliner. After MC No-ID was boo'ed off stage, the headliner did his thing, went off stage, and was planning on coming back to do an encore. He wasn't even down the stairs yet when MC No-ID grabbed the mic and said, "That's it, the club's shuttin' us down! Party's over!" Nice one. It was after 2 already, so we didn't really care, but it did leave a packed room full of people thinking that we had pulled the plug when we didn't.

After the event, of course, he was loitering around outside, wanting to fight with the DJ who nailed him in the face, so security walked that DJ to his car. The whole time, MC No-ID was following behind them saying, "yo, yo, I just want to talk to him."
"Well he doesn't want to talk to you. Go home."
"Hey man, he works for me!"

Apparently everyone works for this guy.

Though I dislike the music more at house events, hiphop events are a way bigger pain in the ass. When we've done hiphop events here, we've been pretty careful about what kinds of events we do, and so we haven't suffered the usual fate of people who host hiphop (i.e., having customers kill each other), but we do always suffer extensive property damage from all the fucking taggers. This time, the door staff were doing airport-level pat-downs, and we've collected more thick-tipped magic markers than we could ever need. Despite that, they still fucked up a few of our stools.

I've said it before, and I'll say it again: taggers are scum. They are mental deficients. They have grown-up bodies and ten-year-old brains. The only behavioral difference is that instead of carving "fuck" in their school desk, or pulling the legs off spiders, they scribble their little pirate "gangsta names" onto other peoples' furniture and walls.

Here's a clue, buttercup: if your instrument is a magic marker and your subject matter is your name, you're no artist, you're just a fucking vandal. Grow the hell up.

Also: Devon, who is one of the folks who gets to clean up this mess, checks in with the tagging tally from the hiphop event:

The one on the balcony railing is probably never going to look right again, because now there's going to be a "clean spot" where the strategically-applied rust that we spent so much time working on before we opened will be uneven.

This place looked way nicer before we started letting customers in.

Also, last night (different event) some girl came up to coat check, yelled that she had lost her ticket and wanted her "fucking jacket" anyway. When she was denied, the girl reached into the tip jar, tore up a bunch of money, and threw cash-confetti at Suzanne.

Photos of Cabaret Verdalet are up now.